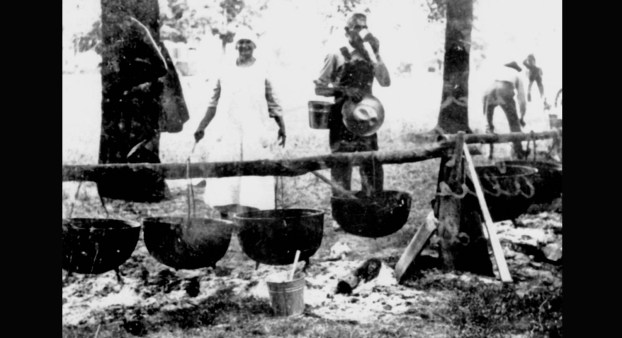 Rio Grande’s Civil War bean dinner is a tradition that dates back to 1870, when it was created to honor those who had fought on the Union side in the conflict. (Rio Grande Memorial Association photo)

RIO GRANDE — Next weekend, Rio Grande will play host to the 150th anniversary of a southern Ohio tradition.

“After the Civil War ended, all of little towns used to host bean dinners in honor of those who fought on the Union side,” Bob Leith, retired professor for Ohio University Southern and the University of Rio Grande, said.

These dinners, which took place in places like Bidwell and Harrisburg, were organized by the Grand Army of the Republic, a group founded to provide support returning Union veterans and help them to establish pensions.

Over the years, Leith said the GAR events became a community staple, with invitations extended to “all men of color,” as well as southerners and those who fought for the Confederacy.

Late 19th century fare consisted of strong and bitter black coffee, hardtack and soup beans cooked over a wood-fed fire, Leith said, adding the meals presented a meal similar to what soldiers had during the war.

While these events were once common in the region, Leith said there are only two left in southern Ohio, one in Vinton, and one in Rio Grande, which will take place on Saturday, Aug. 14 in the Bob Evans shelter house.

Started in 1870, the Rio Grande event has taken place continuously each August for a century and a half, except for last year, when it was canceled due to the COVID-19 pandemic. One year, it was postponed due to inclement weather.

He said, over the course of its history, the event played host to prominent guests, such as politicians running for office and the surviving members of the Waterloo Wonders, while Bob Evans frequently attended before his death in 2007.

“And we have one guy who has been to 70-something of them,” he said.

This year’s event is open to the public, with a cost of $4 for adults and children 10 and up. Those age 9 and younger eat free. All veterans and first responders can eat free, Leith said.

He said organizers are hoping for a good turnout for the milestone.

Leith said those involved begin setting up on the preceding day, bringing in 30-gallon kettles, bought in 1870, to cook the beans.

He said, on the day of the event, they begin cooking over a wood fire at 6 a.m., then serving starts at 11 a.m.

“They’re really good and incomparable,” he said of the beans. and said they are all-you-can-eat and other items are available to supplement them.

In addition to the signature Civil War beans, women from the local church offer pies and homemade cornbread and the local Little League team sells soda. There will be live country/western music and a drawing for a $150 prize, he said.

“It’s very patriotic and all are welcome,” Leith said of the event.