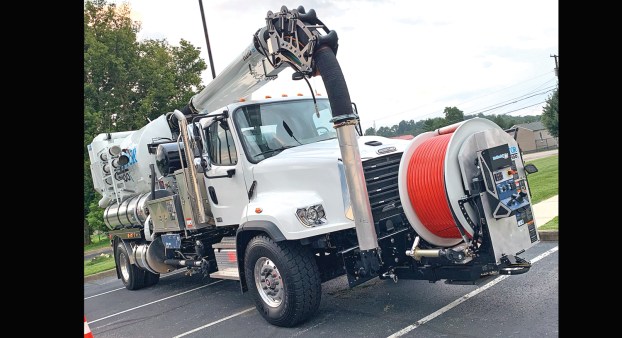 A new vac truck, purchased by the village of South Point for its sewer department, was parked outside village hall on Tuesday. Council members voted at that day’s meeting to approve a financing plan for the truck. (The Ironton Tribune | Heath Harrison)

SOUTH POINT— Those arriving to Tuesday’s meeting of village council were greeted by the sight of South Point’s new vacuum truck for its sewer department, but, due to complications in funding, the session was devoted to the purchase of what Mayor Jeff Gaskin called “the big white elephant out front.”

The village’s old truck had broken down and the council had voted in April to move forward with purchasing a new $400,000 truck, rather than opt for a used vehicle at $200,000.

In the meantime, the village had been renting a truck for its needs.

According to fiscal officer Mark Davidson, he began working in February to secure funding from the state office of the U.S. Department of Agriculture.

Gaskin said the state office “has been wonderful to us” and the village believed all was on track for the funding until it got a call on July 29.

He said the state representative told them under the agency’s new federal head, appointed with the start of the admistration of President Joe Biden, that approval of funding had been “kicked up to the federal level.”

“The new head turned us down,” Gaskin said. “They said we had too much in the bank and too attractive of a loan package. They normally handle it at the Ohio level, but now granting authority has been stripped away from them.”

“We were no longer going to receive the grant due to two reasons — we had too much in our general fund and we were able to obtain financing from other sources,” he said.

Village solicitor Randy Lambert said that projects always had to be approved at the federal level.

“But it was always rubber stamped before,” he said.

Gaskin said while the village was “not rich,” it was in good fiscal shape and free of debt.

“That’s been South Point’s problem for years,” Gaskin said. “We are fiscally responsible.”

Gaskin said he immediately got in touch with U.S. Rep. Bill Johnson, R-Ohio, following the news.

He said Davidson pursued alternative funding, as the village had been waiting months on the truck, but it “was not going to be as cheap as it was.”

Davidson said he got quotes from two banks and the better came from U.S. Bank, who offered a 2.28 percent interest rate on a seven-year loan, with the first payment not due until August 2022.

Gaskin asked the council what they wanted to do “so we can keep the truck.”

“I’m tired of spending money,” council member Chuck Austin said. “My big concern is need or want. But, based on numbers given, we can’t afford to rent.”

The council voted unanimously to go with the U.S. Bank loan on the new truck, which is expected to last at least 20 years and is under warranty. The village’s old truck will be auctioned off.

Following that, the village was set to receive the truck from Jack Doheny Company, who had two representatives on hand.

“Leave us the keys tonight and we’re done,” Gaskin told them, closing the matter.

In other business, the council:
• Voted to give consent to the Ohio Department of Transportation resurfacing project for U.S. 52.

• Heard from village administrator Russ McDonald, who said South Point pumped 20 million gallons of water in the last month and had four main breaks. McDonald said this is comprised of 4 million gallons for metered usage for customers outside the village and 16 million for unmetered customers.

McDonald the contractor has been approved for the trickling tower project for the sewage plant and an electrical upgrade is in the design phase for the plant.

• Heard from police chief Chris Majher, who said he has met with council members who comprise the police committee to discuss policy issue updates. He said proposals will be given to council by the next meeting.

• Heard from fire chief Mark Goodall, who said the department had “a slow month.” He said they will be pursuing FEMA grants for MARCS radios and hose equipment.

• Discussed policies for the electronic sign at village hall. Council member Mary Cogan said she will be talking with village solicitor Randy Lambert and will have a proposal next month.

• Heard from a village resident about parking issues around the park and around fire hydrants. Gaskin said the village would be marking off areas around the meters where parking is not permitted.

• Heard from a village resident who expressed concern over an addiction recovery facility in the village. Mahjer said the police department is “keeping a close eye” on it, but there have been no reported issues or any that they know of regarding it.

• Met in an executive session on personnel matters, with no action taken.

RIO GRANDE — Next weekend, Rio Grande will play host to the 150th anniversary of a southern Ohio tradition. “After... read more