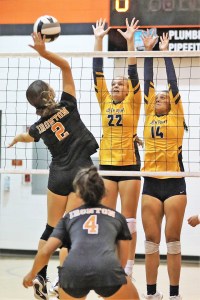 Ironton Lady Fighting Tigers’ Abigail Carey (2) goes up in an attempt to score while South Point Lady Pointers’ Olivia Perkins (14) and Jenna Roberts (22) go for the block during the Ohio Valley Conference preview last weekend. The regular season is officially scheduled to begin on Friday . (Photo By Tim Gearhart)

Sneak Peak.
The Ohio Valley Conference volleyball fans had an opportunity this past Saturday to get a look at the league’s eight teams during a preview held at Ironton High School.
In four 2-set matches, fans got a glimpse of their team and the players and coaches got some insight into strengths and weaknesses.
Fairland took on the Gallia Academy Blue Angels, the defending OVC champions. While the Angels won both sets, the Lady Dragons kept it close.
Gallia won the first set 21-12, but Fairland made a run for it in the second set, falling short 21-19.
Rock Hill faced the Lady Trojans from Portsmouth, falling in both sets 21-9, 21-9.
Coal Grove and Chesapeake split their sets, as did Ironton and South Point.
The Lady Hornets took the first set of the match with Chesapeake 21-19, but the Lady Panthers turned the tables in the second round and won by an identical score of 21-19.
Ironton powered past South Point in their first set 21-10, but the Lady Pointers rallied in set 2, winning 21-17.
The Ohio High School volleyball season officially begins on Friday, although most teams do not have games until next week.