Car catches fire; No one injured 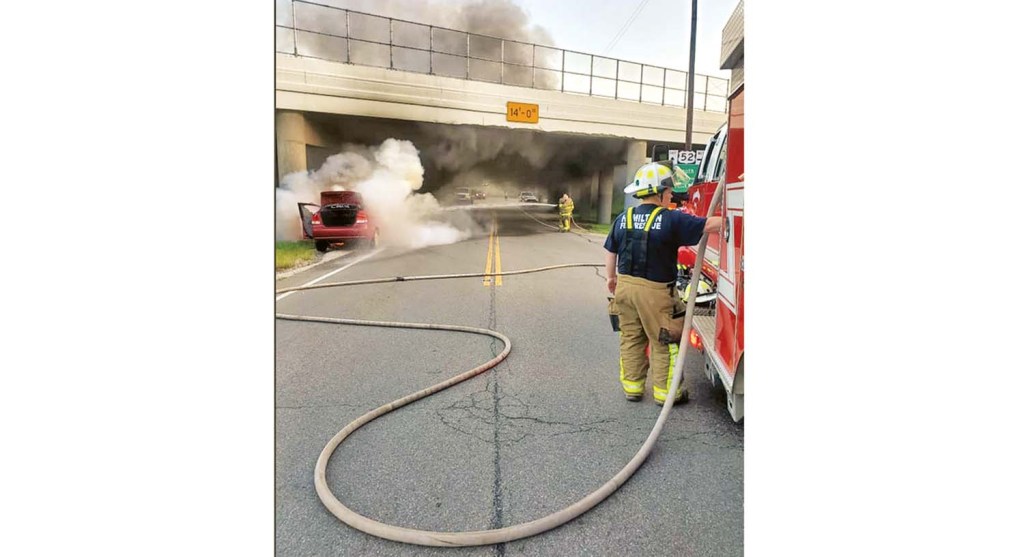 A Hamilton Volunteer Fire Department firefighter waits for the smoke to clear before checking for hot spots on a car that caught on fire on around 7 p.m. on Saturday night on U.S. 52 and the State Route 650 exit. (Photo by Jodi Dutey)

“They were lucky,” said Hamilton Volunteer Fire Department Chief Kim Dutey about two girls who were headed home from practice when the car they were in caught fire on Saturday evening.

Around 7 p.m. on Saturday, the Hamilton Volunteer Fire Department got a call about a car on fire at the intersection of U.S. 52 and State Route 650.

Dutey explained that the girls had pulled over on the side of the highway after they saw smoke or something coming from the engine compartment as they were headed home after cheerleading practice.

Dutey said that one of the girls called her father, a mechanic, who told them to get out of the car and wait for him.
When he arrived, they were in the car. They got out and the father thought the problem was something like a broken radiator hose. The engine was actually on fire and it flared up when he opened the hood.

“When he opened the hood, it just let the fire breathe,” Dutey explained.

That’s when the fire department was called in to douse the flames.

The roads were blocked off and traffic rerouted as the firefighters put the flames out.

Dutey said that while the car was unlikely to explode, since she’s been to dozens of car fires and the cars do not explode like they do in movies and TV shows, people should never sit in the car in situations like that.

“Any time something like that happens, just get out of the car,” Dutey said. “It isn’t safe.”

While the car might not blow up in a fireball, other things can explode and there is always the chance of inhaling toxic fumes from car-related chemicals boiling.

Dutey said they were able to get their personal items out of the car.

“So, in this case, the only thing lost was the car and no one was injured,” she said.