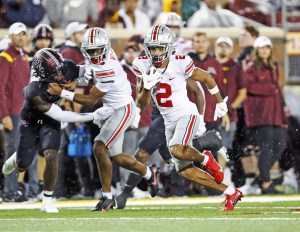 COLUMBUS — Chris Olave saved the fancy footwork for sideline passes, smiled and admitted his heart belonged to a team other than Ohio State when he was younger.
That team was Oregon, which is OSU’s opponent in a match-up of ranked teams on Saturday afternoon at Ohio Stadium.
Growing up in California, Ohio State’s senior wide receiver was like a lot of West Coast kids who were fascinated by the Ducks’ success and their closet full of Nike-designed uniforms that made them the fashion leaders in college football.
Olave called Oregon “my dream school” and recalled how Ohio State’s 42-20 win over the Ducks in the 2014 College Football Playoff national championship game was not the outcome he had hoped for.
“Oregon was like a powerhouse with (coach) Chip Kelly. I remember watching Oregon with my family growing up. We were all Oregon fans, me and my brothers,” Olave said on Tuesday.
Oregon played in national championship games in the 2014 and 2010 seasons. OSU is ranked No. 3 and Oregon is No. 12 going into Saturday’s game.
Olave was an under the radar 3-star recruit when Ryan Day discovered him while recruiting one of his high school teammates.
By the time Oregon contacted him, he already was solidly in Ohio State’s 2018 recruiting class.
“I wasn’t really a big-time recruit until Ohio State offered me, probably like midseason of my senior year, and that’s when everybody else started coming,” Olave said.
“We (he and Oregon) had some contact. They wanted me to visit, like in late January, but my mind was kind of set on Ohio State. It (Oregon) was my dream school but I don’t know. We’ll never know. They never came so I guess we’ll never know.
“It’s like a childhood ream to play in a game like this, Ohio State against Oregon,” he said.
Ohio State coach Ryan Day’s career path also was influenced by Kelly, but in a larger and more direct way.
Kelly was the offensive coordinator at the University of New Hampshire when Day was the Wildcats’ quarterback. Those years were the beginning of a long and close relationship.
“We talked yesterday, we talk all the time,” Day said on Tuesday. He’s very, very close to me. In the summers his summer home is right across the street from mine. His wife and mine are very, very close,” Day said.
“We’ve stayed very close. We share thoughts and ideas in just about everything. He’s a huge mentor to me. He’s a very close friend.”
When Kelly was an NFL head coach he hired Day twice, first as the quarterbacks coach of the Philadelphia Eagle and then for the same job with the San Francisco 49ers.
But, like Olave, Day didn’t make a connection with Oregon when he might have done that. He and Kelly discussed a job at Oregon but Day decided against accepting it.
“We talked several times about going there. At the time we’d just had R.J. (his son) and Nina (his wife) was pregnant with Grace. I thought long and hard about doing it but it was just too far to go at the time,” Day said.
“I didn’t want to go all the way across the country with a young family. Chip was great. He said, ‘That’s why I love you so much. You love your family.’ He said, ‘We’ll coach together someday and five years later, lo and behold, we were together on the West Coast in San Francisco.”

SVLL election of officers meeting to be Sept. 20

The Symmes Valley National Little League will conduct its end of the meeting and election of officers at 6 p.m.... read more