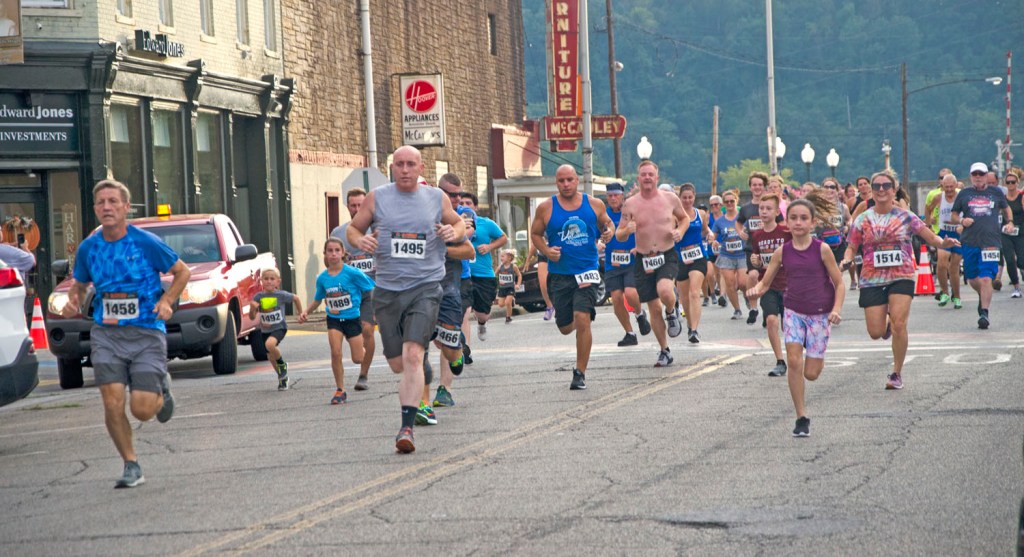 Racers take off at the start of the Ironton River Run on Saturday. (The Ironton Tribune | Heath Harrison) 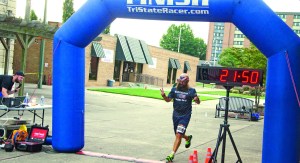 Neil Johnson, 46, of Catlettsburg, Kentucky, won first place in the Ironton River Run, with a finish time of 21:51.8. (The Ironton Tribune | Heath Harrison)

More than 60 racers came to Ironton on Saturday to take part in an event to raise funds for the revamping of the city’s floodwall murals.

The Ironton River Run was a 5K fundraising event organized by local nonprofit Third and Center.
Amanda Cleary, of Third and Center, organized Saturday’s event and was also one of the racer’s said the goal is for the group to raise $100,000 within a year to go toward the mural project, which would involve retouching existing murals and adding new murals to the wall.

She said Ironton Mayor Sam Cramblit has agreed to a partial match for the funds they raise.

Cleary said the hope is to show the value of art in a community by highlighting local artists for the new murals. She said they have also spoken with Robert Dafford, who did the Portsmouth Flood Wall murals, and he has committed to doing a panel.

Earlier this summer, Third and Center funded a new mural on one of the northern parts of the wall, a three-panel mural done by Ironton and St. Joseph high school art students.

Third and Center, formed by Cleary and Abby Kuehne, her co-owner of the former The Vault Market at Third and Center streets, has secured funding for several projects around Ironton, including artistic bike racks, sidewalk murals and swing sets for the riverfront.

Participants in the run ranged in age from young children to those in their 70s. The route began at the Rotary Fountain, with runners going along the riverfront and back up Park Avenue.

One of the children taking part made an impressive showing, with Baylor Fry, 10, of Chesapeake, taking fourth place at

24:14.9, while Brendan Dawson, 15, of Ashland, Kentucky, rounded out the top five at 25:15.2.
Another child in the event, Ealynn Virgin, 9, of Kitts Hill, also made a remarkable achievement. Not only did she finish in 9th place at 26:57.8, but she was also the top female runner in race, coming in ahead of many adults.

All runners completed the route in less than an hour.

The run was also sponsored by several local businesses.

— For more photos from the run, see this weekend’s Focus page.