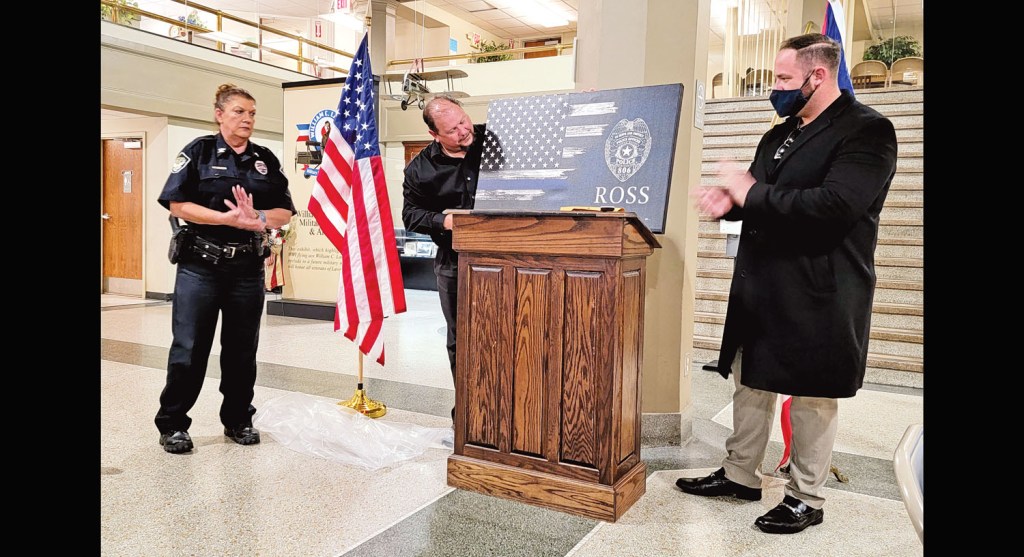 Retiring Ironton Police detective Capt. Joe Ross checks out a piece of artwork given to him by the department during his retirement party on Thursday as IPD Chief Pam Wagner and Ironton Mayor Sam Cramblit applaud. (The Ironton Tribune | Mark Shaffer)

Ross says he will miss his ‘brothers in blue’

On Thursday afternoon, the Ironton Police Department said good bye to one of its tenured police officers.

Ross graduated from Dawson-Bryant High School in 1984. He joined the U.S. Army and was a combat engineer. He went on to attend Morehead State University and then went to through Ohio Police Officers Training Academy and became a police officer in 1993. He was an officer with the Coal Grove Police Department, the Proctorville Police Department and was a dispatcher for the Ohio State Highway Patrol before joining the IPD in 1996. He became the captain of the IPD detective division in 2013.

With 25 years of service, he has enough for full retirement and decided it was time to move on.

Even though he is leaving by his own choice, Ross said it was bittersweet.

“I’m still a young guy where I can do the job, but it is time to pass the torch on to the younger guys. Being a policeman is a young man’s game and I feel that this is their time,” said Ross, who is 56.

Ross hired in the same time as Wagner but they have known each other far longer since their mothers were best friends. Also hired at the same time was Tony Forrest.

“I’ve been with those two since 1996 and it was enjoyable to work with them for my whole career,” Ross said. “We’ve had each other’s backs since we started.”

Wagner thanked Ross’ wife, Teresa, and their daughter, Sammy and added that the family of police officers are the unsung heroes in law enforcement.

She noted that Ross had numerous accolades over his years of service, including an accommodation of valor in 1998 for entering a burning house to rescue a man, one in 2001 for a fraud investigation that lead to conviction and some of the victim’s money being returned and one in 2011 for his part in arresting an armed man who was robbing the Bob Clyse auto dealership. He has also received accolades from other agencies such as the DEA and FBI.

Ross was presented with a plaque from the mayor’s office honoring his 25 years of service and a large piece of art from the IPD that had the police flag, his badge and his name on it.

Ross thanked everyone for the gifts and for attending his retirement party.

“It is a bittersweet day. I really enjoyed the police department, I was passionate about my job,” he said. “I will miss the people I worked with, you are my brothers in blue. I love each and every one of them including all the ones I worked with in the past. I am going to miss the friendship and the brotherhood we have in each other.

The thing that Ross won’t miss is the phone calls that come in at all hours of the day, which took him away from family dinners and other events.

“I am not going to miss all the doom and gloom that comes with this job,” he said. “We deal with other people’s problems and sometimes, we forget that we have our own problems. I want to focus more on my family.”

Ross may be retiring from the IPD, but he will continue to use his investigation skills with his new job as the supervisor of the Children’s’ Services investigation division.

“The two jobs kind of intermingle,” he said. “I’ve worked hand in hand with them and I am very familiar with their job. I know almost everyone who works there and the opportunity arose and I thought it was a great opportunity.”