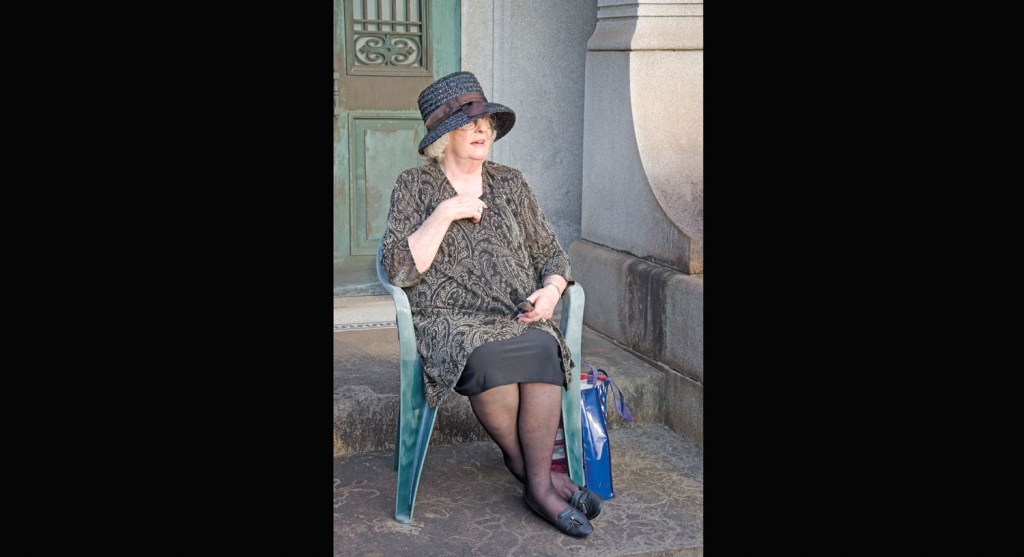 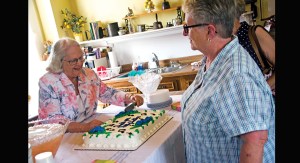 Lawrence County Historical Society trustee Kay Rader cuts the cake at the annual sing-along at the museum in 2018. (The Ironton Tribune | Heath Harrison)

One thing that everyone knows about Kay Rader is her love of history, especially that of Ironton and Lawrence County.
Rader, a long-time member of the Lawrence County Historical Museum, does have a favorite area of history.

“My very favorite thing is the very beautiful houses we have in this county, especially the ones we have here in Ironton,” she said. “Each one has its own history and I just love that.”

Another thing that Rader is well-known for is her portrayal of Nannie Kelly Wright during the museum’s annual Cemetery Walk at the Woodlawn Cemetery in Ironton.

Wright is the world’s only female ironmaster. She was born in Catlettsburg, Kentucky to a steamboat captain. She married Lindsey Kelly, who was an Ohio state senator and ironmaster of Centre Furnace. Wright thrived so much that at the height of her wealth, the only woman richer than her in the world was England’s Queen Victoria.

“I love playing her,” Rader said. “She has a wonderful history about her and lived a bold adventure and that attracts attention. And everybody in town knows a little about her. She was the only female ironmaster we have ever heard of.”

And in sad news, this year will be Rader’s final year as Wright as she has for the past 15 years.

“My voice is giving out,” she explained. “It is someone else’s time to step up and take my place.”
Rader was in Ironton in 1935.

And she was not born at the hospital.

“I was born at home,” she said. “We had two hospitals, but Dr. Charles Gallagher delivered me at home. That was the custom.”

Her dad was a pharmacist at E.G. Barrel Drug Company and her mother was a homemaker.

She graduated from Ironton High School in 1953 and headed off to Western College for Women in Oxford, Ohio and studied biology.

“After three years there, I got married to Bob and I transferred to Marshall and graduated from there in biological sciences,” Rader said.

The Raders had two children, Jan, who is the chief of the Huntington Fire Department, and Paul, who is a Presbyterian minister in Chattanooga, Tennessee, and Carla, who is a homemaker.

Rader graduated in 1957 and but didn’t become a teacher until after the children were in school.

“I began teaching at the Open Door School,” she said. She said teaching there was different than it was in public schools.

“You were teaching them just daily living skills. I loved it.”

The school got its name after a competition was held to name it. Open Door was chosen, Rader said “because all other doors were closed to these children. They were exempted from public schools if they had an IQ of lower than 50.”
Rader taught at Open Door School for eight and half years and then worked in the office of First Baptist Church for five years before going to Tri-State Industries.

She said she loved working at the schools.

“Those children are really sweet,” Rader said. “I am still in contact with several of them that I had as students.”

Rader got involved with the museum because of her friend, Virginia Bryant.

“She was very active in the historical society and wanted to help me with the clothing at the museum and we opened in 1988,” she said. “I just love every aspect of the museum. It is a great place to hang out on a Saturday or Sunday afternoon and look up your family history.”