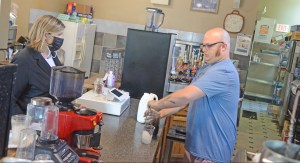 Dayton Mayor Nan Whaley visits The Traders Café as part of the first stop on a walking tour of the city with Mayor Sam Cramblit II on Monday. Whaley is running as a Democratic candidate for governor in 2022. (The Ironton Tribune | Heath Harrison)

With a year to go until the 2022 gubernatorial and U.S. senate elections in Ohio, candidates will likely be making regular stops in our region.

On Monday, the City of Ironton was host to the first to visit, when Democratic gubernatorial candidate Nan Whaley took a tour of downtown businesses.

Whaley who is in her eighth and final year as mayor of Dayton, is running to unseat incumbent Republican Mike DeWine next year. She will face Cincinnati Mayor John Cranley in her party’s primary, while DeWine is being challenged by former U.S. Rep. Jim Renacci on the Republican side.

Prior to serving as mayor, Whaley was a city commissioner in Dayton for eight years. She said she is on an 88-city tour of the state, with Ironton being the 44th stop.

“We’re at the halfway point,” she said.

Whaley said she is running because she feels DeWine has been “too weak” to stand up for what she says voters tell her is needed.

Whaley began her tour, led by Ironton Mayor Sam Cramblit II, at the city’s farmers market, where they walked downtown and she introduced herself at four local businesses: The Traders Café, Unger’s Shoes, Iron City Hardware and Central Hardware and Furniture.

Along the route, she asked Cramblit about things she saw, such as the Iron Furnace Walking Trail, while he told her about downtown developments such as the Brumberg Building renovations.

Whaley said the aim of the tour is to talk with local business owners statewide and find out what issues are on their minds.
At Unger’s Shoes, she learned of how the store is a second generation, 84-year tradition family operation.

Hacker told her they strive to offer things the big box stores do not.

And she visited the furniture side of Central Hardware & Furniture, where owner Rich Donohue, who also has several Rax franchises in Ohio, spoke with her about both the store and restaurant businesses.

Donohue said one of the biggest issues now is to get people to return to the workforce.

Whaley said she understood the importance of this and said she has heard that child care costs are a significant part of this, particularly for women. She said he hoped the government might be able to alleviate those costs.

Following the tour, Whaley spoke with The Ironton Tribune for an interview.

When asked what she learned from her Ironton visit, she said she was impressed with the relationship business owners have with their mayor.

“The fact he has such a strong relationship with small businesses, and how valuable your small businesses find Ironton to be is just a huge opportunity for this community,” she said. “How people feel invested in this city is great. I see great opportunity here and imagine how it would be if they had a governor who was really partnering with them.”

Republicans currently hold supermajorities in both houses of the Ohio General Assembly, with the gap in the two parties there far greater than the state’s voter demographics.

The issue of gerrymandering and a more representative map for districts has been a major focus in the news, with the several groups filing a third lawsuit this week against a plan they said would create unfair districts.

“I’m hopeful we still get fair districts,” Whaley said, stating she supported the suits.” We’ll wait and see what the Supreme Court says. I still believe in the process and want it to be fair.”

Given the majorities in the statehouse, it is likely that Whaley, as a Democrat, could face an opposition-controlled legislative branch.

“I’m certainly not going to bow down to the extremists in the statehouse like the governor has,” she said. “I think we need to stand up to them. Most of the people in Ohio don’t agree with the actions they are taking. Most people in Ohio want to be in safe communities, safe from COVID and their kids being able to go to school.”

She said the biggest need on the pandemic is for DeWine to institute statewide mask mandate for Ohio schools.

“Children under 12 can’t get vaccinated yet, so masks are the best way to protect our kids,” she said. “He’s just weak. He won’t stand up for kids, and if he’s not standing for kids against these extremists, then not going to stand up for anybody. We want our kids to be safe and in school. It’s really important for kids to be in school and masks help that happen.”

She said there has been “a complete lack of leadership” from DeWine and the statehouse.