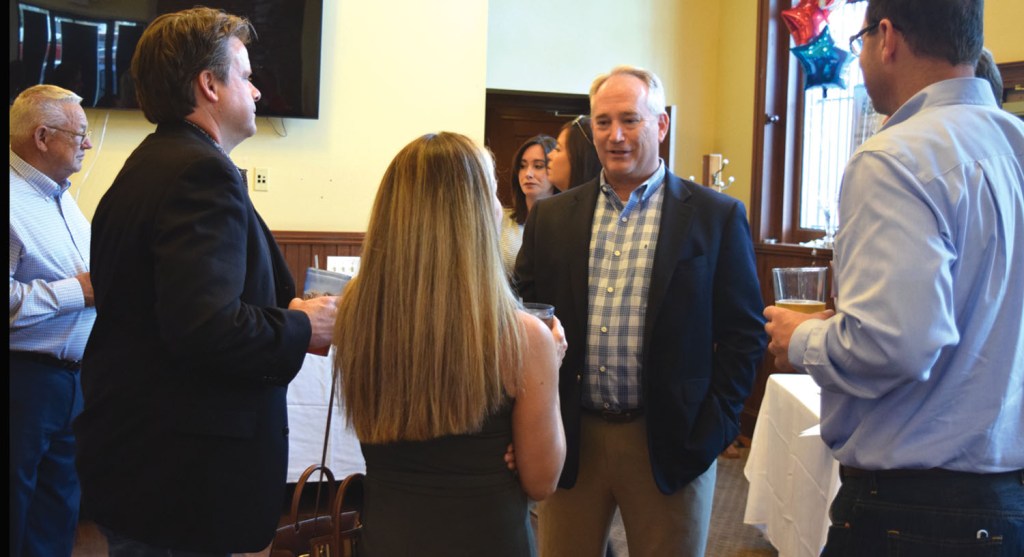 Ohio Auditor Keith Faber speaks with attendees at a campaign fundraiser at The Depot in Ironton on Thursday. (The Ironton Tribune | Heath Harrison)

When Ohio Auditor Keith Faber last visited Ironton, he was auditioning for the job in 2018.

And now, with a full term as auditor almost complete, he’s on the road to ask for four more years in the position.

The Republican was at The Depot restaurant in Ironton for a fundraising event, part of a swing through southern Ohio on Thursday.

“He’s done more for Lawrence County than any other officeholder,” Dr. Bill Dingus, executive director of the Lawrence County Economic Development Corporation and one of the attendees of the event, said.

Dingus said in Faber’s career, which also includes his prior position as state Senate majority leader, Faber had been a major help in developing The Point industrial park.

“We appreciate him and his leadership,” he said of Faber.

Faber said he has worked hard to produce “transparency and efficiency in state agencies.”

This has been done through things such as an unemployment compensation audit and a 25 percent increase in performance audits from his office, Faber said.

Faber also said they had worked to remove a “corrupt” and “bad actor” in former Pike County Sheriff Charles Reader.

Reader was sentenced to prison this year after pleading guilty to stealing currency obtained from prior arrests.

Going forward, Faber said he wanted to find ways to improve higher education in the state and make it more efficient, particularly looking at the College Credit Plus program.

Faber summed up the mission of his office.

“I like to remind people that the state auditor doesn’t collect taxes or audit individuals and businesses,” Faber said.

He said, instead, it is a watchdog of government.

“We look out for Bob and Betty Buckeye and there’s still a lot of work to do,” he said.

Judge: Purdue Pharma can resume groundwork on its settlement

‘A tremendous loss’ (WITH GALLERY)