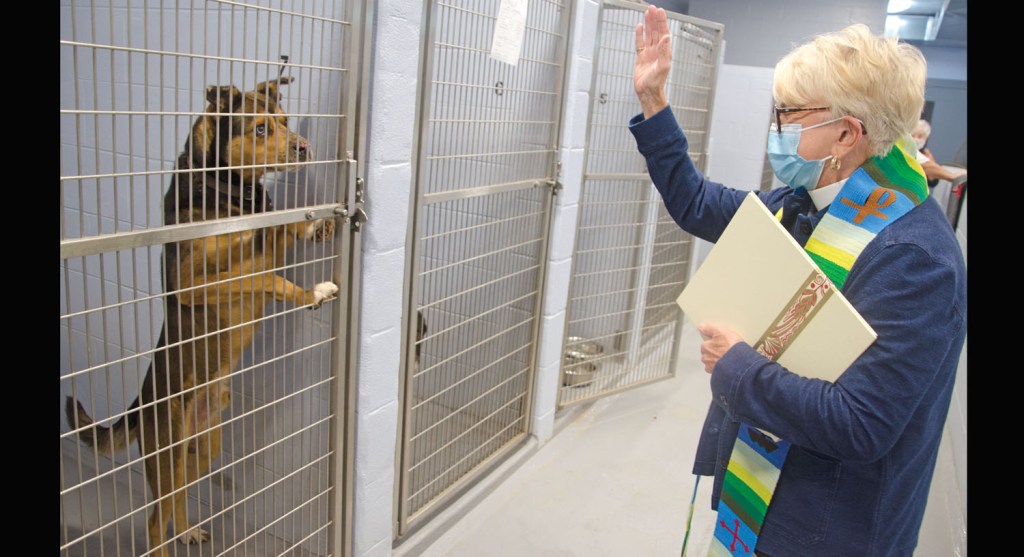 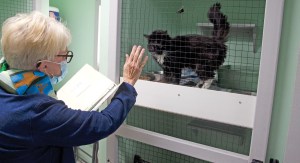 Sallie Schisler, vicar of Christ Episcopal Church in Ironton, blesses the felines in the cat manor of the Lawrence County Animal Shelter on Saturday. (The Ironton Tribune | Heath Harrison)

“St. Francis said, ‘If you want to know the creator, get to know his creation,’” Sallie Schisler, vicar of Christ Episcopal Church in Ironton, said.

So, on Saturday, timed for the week of the Feast of St. Francis, she visited the Lawrence County Animal Shelter, where she went to both the cat manor and the dog kennels and blessed the animals.

Schisler said Catholics and Anglicans, of which Episcopals are a part, conduct such a blessing each year.

“Francis was the patron saint of animals,” she said. “He was wealthy and gave away everything he owned.”

St. Francis, who lived at the turn of the 13th century, was known for his love of animals and is said to have even preached to the birds. His feast takes place on Oct. 4.

It took Schisler awhile to walk through the facility and deliver the blessing, as both the cat and dog sections were full of animals in need of a home.

The shelter is a low-kill facility, avoiding euthanasia except in extreme cases.

The cost of adoption for dogs at the facility is $50 for county residents and $75 for those out of county, with an additional $8 for tags for Lawrence County residents.

The cost of adoption for cats is $20. This covers the cat’s first combo shots. For more information on the current procedures, call the shelter at 740-533-1736 or visit their Facebook page.

The Lawrence County Animal Shelter is located at 1302 Adams Lane in Ironton.

Judge: Purdue Pharma can resume groundwork on its settlement