“Just looking at where we started from, we’ve overcome so much,” he said.

Edwards said the band had to go into quarantine for two weeks at the start of this school year, due to the COVID-19 pandemic.

But the Band of Gold persevered and, on Saturday, they were named as Overall Grand Champion in the band competition.

Ironton High School served as host to 15 bands from across the region, who competed in four categories with themed shows.

South Point’s was titled “…That Go BUMP in the Night,” and began with the band and guard members creeping out from under large beds on the field at Tanks Memorial Stadium.

Edwards said the band began practicing their show in July, including working on it at camps.

“I don’t think I’ve ever been more proud of this band,” he told the members as they celebrated on the field after receiving the top trophy.

The band, led by Emily Crisp and featuring a sax solo from Xavier Osborne, was also named best overall for music, general effect, visual and percussion, sweeping all but one category, guard, which went to Point Pleasant High School.

It was another victorious night for the band, who also won big in a competition at Marshall University earlier the week.

“I will take both of these performances and the way they felt over the trophies,” Edwards said to the band. “It’s not about the trophies, but the memory attached to them and what it took to push you today.”

Coming in as Overall Reserve Grand Champion was the 2019 winner of the competition, Dawson-Bryant High School’s Band of Pride, for their show, “From Darkness Into Light,” with Chesapeake High School coming in as Second Runner Up.

The event ran for more than five hours, kicking off with Sciotoville Community School and smaller bands in Class C and wrapping up with South Point, the only one competing in the largest category of Class AA this year.

It was a return for the competition, which was canceled in 2020, due to the COVID-19 pandemic. This was also the first year it was overseen by Ironton High School’s new band director Nick Basham.

Ironton served as host for the event, with its members presenting trophies to the winners. They did not compete in the event, but performed for the crowd at the close of the event. 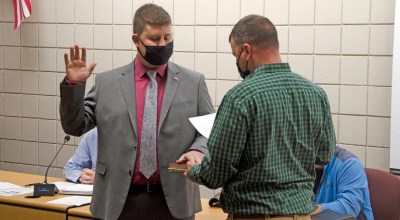