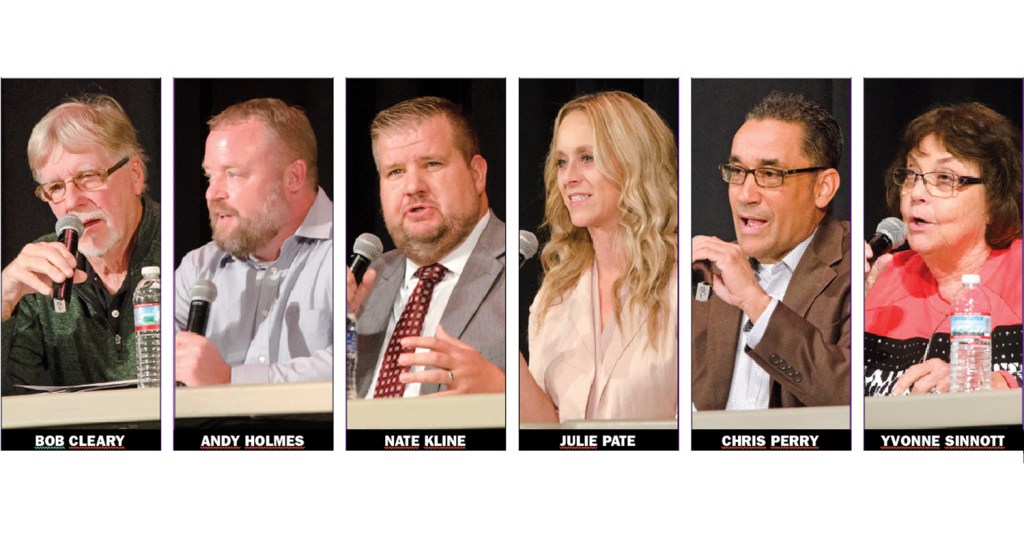 With Election Day just three days away, voters can get a chance to hear from the candidates by watching The Ironton Tribune’s election forum, which has now been posted to our website and Facebook page.

The event was recorded by Armstrong and is available on the company’s YouTube channel. It took place at Ironton High School on Wednesday and was open to those running for Ironton City Council and Coal Grove Village Council.

Of Ironton candidates, five of the six on the ballot took part in the event, with incumbents Bob Cleary and Nate Klein appearing with hopefuls Julie Pate, Chris Perry and Yvonne DeKay Sinnott. Incumbent Craig Harvey notified The Ironton Tribune in advance that he had a prior scheduled commitment and could not attend.

Of Coal Grove candidates, incumbent Andy Holmes was the only person to attend of the seven on the ballot.

In introducing himself, Holmes, who has served on Coal Grove’s council since 2017, said he was proud of the work he and council have done in his time in office, particularly with regards to infrastructure and a major water line replacement in the village. He also noted work to upgrade Paul Porter Park, as well as make it compliant with the Americans with Disabilities Act.

“But there’s more work to do,” he said, noting he wanted to focus on recruitment and pay of police officers as well as set up a plan for village workers to pick up brush and debris not covered by garage service.

“I want to work to implement these things to make everyday life of our residents better,” he said.

Cleary was the first of Ironton candidates to speak.

A former mayor and current council member and grandfather of 13, he pointed to his more than four decades in local business as owner of multiple companies.

He said his U-Haul franchise had been named one of the top 100 in the nation, reflecting his approach.

“It isn’t how much money you make that gets you the award, it’s customer service,” he said, noting that he is always at his tool rental company, where city residents can find him and often talk issues with him.

“I would appreciate the votes to put me back in for one more term,” he said.

Seeking a second term was Kline, who said he was “honored to be chosen” by voters in 2016.

A financial agent who also teaches in Portsmouth schools, Kline said his children’s future is one his key motivators in government service.

“This race is important and I want to continue work to give them great place to grow up,” he said. “I’ve worked hard over my first term to help put our city in a better financial position and passed legislation to make it a better place to live.”

“And I want to keep our great city moving forward,” he said.

Making her first run for office is Julie Pate, who said she moved back to the city eight years ago. She works as a paralegal and realtor, as well as a substitute teacher in several Lawrence County school districts.

“I don’t have experience,” she said of politics, “But I’ve never been more excited to be a citizen and part of Ironton.”

She said she follows Ironton developments and “would like to join in what everyone’s doing.”

“I appreciate and am very honored to run, and would appreciate the chance to serve the citizens of Ironton,” she said.

Chris Perry said he moved back to Ironton and hopes to join the council, who he said, along with Mayor Sam Cramblit II, are making residents “happy with a great many things.”

Perry said he looks forward to joining the council and he has a “desire to see things excel in Ironton that comes from a deep passion for the city.”

“What I most want to express is that I have a tremendous passion for our great city,” he said.

“Things have gotten better,” he said. “I am excited to be back home and a be candidate.”

While Yvonne DeKay Sinott has been a longtime business owner in Ironton and comes from a family that has been here for generations, she said this is her first run for office.

Having run the Yvonne DeKay School of Dance for 57 years, she said she appreciates the city’s residents for backing her all of this time.

She said that education is one of the “answers to a lot of the problems” the city faces.

“I’ve proven the point that I like to make things work,” she said. “I’m willing to learn and want to hear comments and help my community.”

The candidates answered questions directed at all participants, as well as those specific to Ironton and Coal Grove.

One that affected all was the release of the latest U.S. Census figures, which showed a population drop across the county and what could be done to prevent outmigration.

Holmes said this is something he thinks about because of his sons and those of their age.

“I want to make sure we’re providing every opportunity to keep these guys home,” he said.

He said one thing that can be done is working with the county’s land bank.

“To remove blight, cleaning up neighborhoods and creating property to build on,” he said.

As an example on attracting businesses, Holmes spoke of a restaurant that had expressed interest in opening in Coal Grove, but ultimately declined, due to a prohibition on alcohol sales.

Holmes said he worked to get a measure on the ballot, which was approved by voters, and allowed such sales.

“These are just some things we can do to solicit businesses,” he said.

Cleary spoke of the record of the city in recent years, which he said is helping to ease the problem.

He pointed to the opening of the Frisch’s Big Boy, two hotels and the Armory Smokehouse at the Gateway Center as major developments and noted that more restaurants are expected to go into the location.

He said, in his experience with his U-Haul business, he speaks with more customers moving to Ironton than leaving.

“It seems like I see just as many, if not more, people moving back,” he said.

Of those leaving, he said they tell him the main reason is “they’re following their kids,” who have left the area.

“I think Ironton is offering more with the expansion we’ve had,” Cleary said. “And there are more opportunities coming to Ironton than what we’ve had in the past.”

Kline said a major factor in population drop is lack of housing opportunities.

“There are not a lot of homes available for people to purchase or rent,” he said. “Families are not as large as they used to be and less people are living in same amount of housing.”

He said the city needs to develop a strategy and is “working on opening up more housing opportunities for people in city.”

He said they also need to ensure a “safe environment” by investing in police and fire departments.

“And over the last four years, we’ve done that,” he said.

“It’s important for people who want to live and work in same place,” he said, noting the council had established an economic fund for the mayor to “use to recruit and retain businesses.”

And the fourth factor he cited was “quality of life,” stating the need to keep “great schools” and “things to do.” He said the city is always partnering with its school system and that things such as walking paths on the riverfront and Etna Street are providing recreation opportunities.

Pate, who said she has worked for the Census in the past, said she understood the numbers were “disappointing,” though she said the rural aspect of the county may have impacted the count.

“It is difficult to get cell service and hard for the Census to gather information in county that we’d like to,” she said. “But the numbers do say people are leaving.”

She agreed with Kline that it “boils down to housing.”

“We need housing and apartments that people can afford to live in and be safe and clean while there,” she said.

She said increased recreation with more parks, in particular ones for those with sensory needs, could also help to create better recreation for all.

“It is one of my passions to have my daughter to never want to leave, and for all her friends to stay here and be teachers, doctors and all the things that keep our community going,” she said.

Perry said he would like to see the city partner with the schools and put a bigger emphasis on the possibilities of trade schools.

“Four-year college is not for every kid,” he said. “Learning a trade and staying local is a great way to make living and raise a family. It can help springboard somebody into great career.”

Perry said he believes the city is “primed for several different things,” including “inviting industry back to Ironton.”

“That would increase the tax base for our city, rather than expecting one third to carry the burden,” he said.

Sinnott said industry is something she has “thought about many times.”

She said one thing that could provide opportunity is a recycling center and program.

“It’s a big moneymaker for some cities,” she said.

She said she would also like a hotel in downtown, stating the building that housed The Vault Market would be a prime site near the river.

“And I want to see boats coming down river again, and the regatta on the river again, to entertain people and be something clean for our community,” she said.

She also pointed to Huntington’s user fee as a revenue generator, with a tax on those who work in the city.

“We are the cheapest city on the river, from Portsmouth to Huntington,” she said. “We want to keep doing all the things we like — but we cant keep asking for grant, grant, grant. We have to make money.”

To hear all questions to candidates and view the full two-hour presentation, visit our website and Facebook page.

County gets funding for new jail