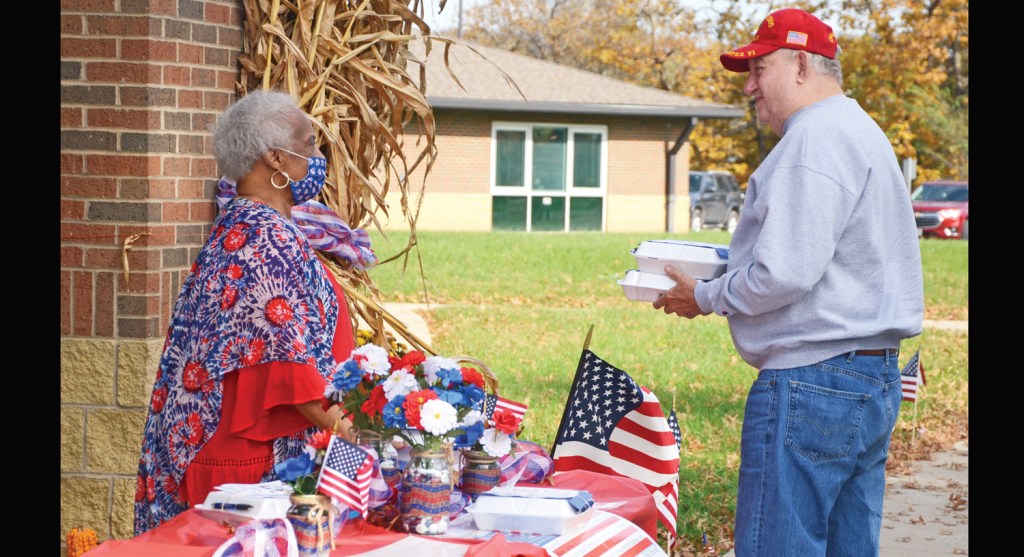 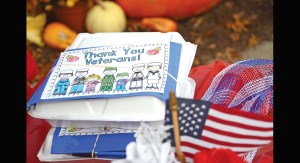 Burlington Elementary School students created thank you cards for veterans, which were distributed with meals in a drive-thru pick up at the school for Veterans Day on Thursday. (The Ironton Tribune | Heath Harrison)

BURLINGTON — In a typical year, Burlington Elementary is host to a large Veterans Day assembly, inviting those who served, as well as active duty military, to the school, where they are honored by all of the school’s classes.

However, for the second year, due to the COVID-19 pandemic, that event had to be called off.

But the school still worked to honor veterans from the community on Thursday.

A drive-thru lunch event took place, where they could pick up packaged meals, consisting of chicken, mashed potatoes, green beans, a roll and a cookie, librarian Harriet Ramsey said.

Ramsey, who usually heads the Veterans Day assembly, was one of those working the table in front of the school, handing out the packages to those who stopped by.

Many who came by had children, grandchildren and other relatives attending the school, who faculty would bring out to greet their family members.

Students also worked to create thank you cards for the veterans, one of which was included with each meal. 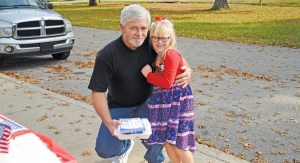 Raymond Adkins hugs his granddaughter, Gracie Adkins, as he stops by. (The Ironton Tribune | Heath Harrison) 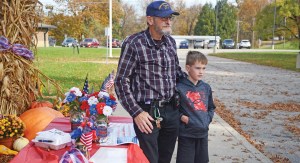 Carson Hunt, pastor of First Presbyterian Church, with his grandson, Luke Hunt, at a drive-thru lunch pick-up event at the school for Veterans Day on Thursday. (The Ironton Tribune | Heath Harrison)