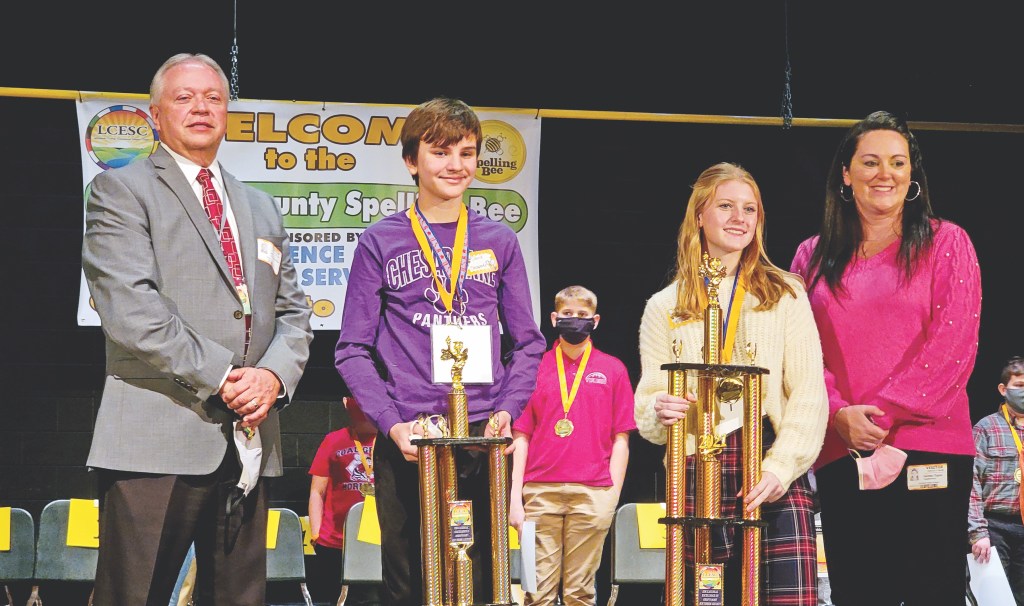 The 2021 Lawrence County Spelling Bee on Wednesday was a long one. It took 27 rounds to find out who was the first place winner.

As always, it began with a practice round of easy words so the students could get warmed up and then, with each round, the words got progressively harder. Twenty rounds later, there were just two finalists, Isaiah Saul, a seventh grader from Chesapeake Middle School, and Emily Ferguson, an eighth grader from Fairland Middle School.

Some of the words they were asked to spell in the next six rounds included guarantor, embroidery, heresy, lachrymose and adzuki, a red bean used in Asian foods.

“Let’s go to the challenge words,” said host Ernie G. Anderson, a DJ for WLGZ and long-time host of Hi-Q, to the bee’s judges.

And it was challenging —Saul improperly spelled poignant and it fell on Ferguson to spell the next two words correctly, otherwise the rounds would continue until someone correctly spelled two words in a row.

Her first word was debacle, which she spelled correctly.

Then came Ferguson’s next word — capricious.

She asked for the definition and was told by Anderson that it meant “impulsive or unpredictable.”

She spelled it and Anderson said “You are correct. And Emily, congratulations. You have won the spelling bee.”

This isn’t the first spelling bee Ferguson was won.

“This is my second time winning, I won my first time here when I was in the fourth grade,” she said.

She agreed that 27 rounds was a long time for a spelling bee and she didn’t actually know what an adzuki was.

“I had seen it on my school list, but I didn’t know what the definition was,” Ferguson said. But most of the words on the challenge list, she had never seen before. “I have never ever heard of them.”

She said her mother, Alison, helps her practice words but that wasn’t in her mind before the spelling bee.

“I just calm down, take a deep breath and then come into. And, I always ask for the definition,” Ferguson said.

Alison Ferguson said they have been practicing for the spelling bee every year for five years.

“I’m just so proud,” she said. “She has worked really hard and I am just happy to celebrate her last year of eligibility with a win.”

Saul said being at the county spelling bee was a bit harder than it is at school.

“Especially the words, there are ten times as many words on this list than at our district,” he said. He added that at 27 rounds, they had only reached the third level of words. “There are words that are even harder.”

The county spelling bee is put on by the Lawrence County Educational Services center and was open to students from fourth through eighth grades.

The regional spelling bee is done online and is open to all school winners were eligible to take an online test to qualify for that event.