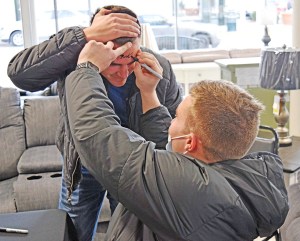 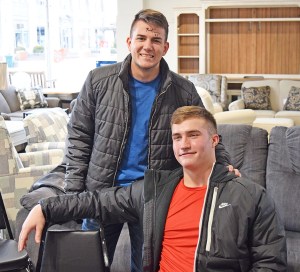 Ohio State Buckeyes’ freshman linebacker Reid Carrico signs the forehead of J.D. Leach during an autograph signing at Central Hardware Furniture at South Third and Center streets on Thursday. Carrico was home before heading out this week with the team to play in the Rose Bowl on New Year’s Day. (Jim Walker/The Ironton Tribune)

Reid Carrico is home for Christmas just like most college students. But his visit will be cut short and he doesn’t mind starting the new year 2,271 miles away from Ironton.

The former Ironton Fighting Tigers  two-time first team Division 5 All-Ohio linebacker and Defensive Player of the Year spent his fall playing for the Ohio State Buckeyes and he will be making the journey to Pasadena, Calif., this week when they play Utah in the Rose Bowl on New Year’s Day.

Carrico is excited about the chance to play in the Rose Bowl but it is somewhat bittersweet since the Buckeyes lost their final season game to Michigan and missed out on a chance to make the College Football Playoffs.

“The Rose Bowl has always been one of the games I’ve wanted to play in. I think everybody should want to play in the Rose Bowl. Like they say, it’s the granddaddy of them all.

“Every time I hear somebody talk about the Rose Bowl who has already been there, they always tell me it’s one of the best memories of their life,” said Carrico.

“It’s kind of sour and kind of sweet. In my opinion, I think the Rose Bowl should be the national championship game every year, but I can’t complain that we missed the playoff and that we’re going to play in the Rose Bowl. It’s still going to be great and I’m looking forward to it.”

The visit home had some extra benefits for Carrico and the 6-foot-3, 235-pound freshman linebacker got a chance to pick up some extra spending money with an autograph signing at Central Hardware Furniture at South Third and Center streets on Thursday.

Carrico said the new Name, Image and Likeness ruling allowing college players to financially benefit off their college playing status has been a nice perk.

“It’s a lot of time and a lot of commitment,” Carrico said about playing college football. “And that’s the good thing with this NIL stuff. We’re able to make some money.

“We’re not playing right now, so we can do these NIL deals. You don’t make a bunch of money, but it’s a bonus. It’s a big enough deal and honor just playing at Ohio State and then you get to make some money on the side is good.”

Carrico was able to get in four games this past season and thus maintain his freshman eligibility with a redshirt.

He said there was a lot of adjustment coming from high school to college both athletically and academically but he appears to have made the transition is true Reid Carrico fashion.

“It was good. It had its ups and downs. I had to learn how to balance football and school,” said Carrico.

“After the first half of the semester and the season, it all started to smoothen out. When it’s all smooth like that, you don’t have to worry about that much  I was able to improve my game a lot, especially through the bowl camp.

“The biggest adjustment was the amount of time that goes into playing college football. A lot of people don’t have a way to know what we do.

“There are a lot, a lot of hidden hours. There are times when I might wake up at 6:30 in the morning and have to go life, then go to class and once I get out of class I might have practice for three and a half hours and then meetings after that.

Once the Rose Bowl experience has concluded, Carrico will set his sights on next season and is planning to make a strong impression on the Ohio State coaching staff during spring workouts.

“It’s tough, but I was really blessed with the whole time I was at Ironton. We were really in good shape physically and things like that.,”said Carrico.

“I’m going to have to have a big spring and just prove to the coaches that I can play and that I’m accountable and that my knowledge of the game is up to par and go from there.”