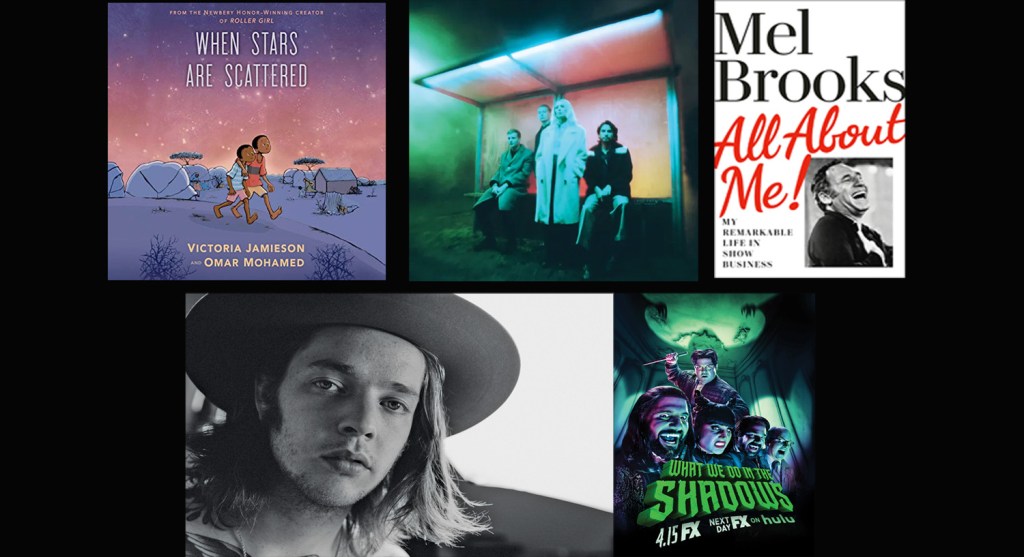 The Ironton Tribune staff, along with community members, selects their favorite arts and culture moments and releases from 2021:

1. Children’s graphic novel, “When Stars are Scattered,” by Omar Mohamed and Victoria Jamieson. It paints a picture of what a refugee camp is like, including struggles and enduring them, from a child’s perspective.

4. Cream of the Crop, a juried exhibition of works from regional artists using a wide range of media at Southern Ohio Museum.

5. Portsmouth Little Theater, which has been given a facelift by volunteers and donors and provides a place for locals to hone their craft and transport viewers during each performance.

1. Wolf Alice – “Blue Weekend” – With pop music dominating the charts, it seems a landmark album from a guitar-based band is a rarity these days. English band Wolf Alice’s third album features an eclectic mix of styles, from shoegaze to grunge, alternating from haunting vocals to hard rock, and works as a cohesive whole, hearkening to back to the ‘90s glory days of British rock.

2. Courtney Barnett – “Things Take Time, Take Time” – Just missing my top spot, but containing my favorite song of the year, “Rae Street,” is the latest from Australian singer Courtney Barnett. Softer than her last album and written during the COVID-19 pandemic, it features her usual clever, rambling lyrics and no filler.

3. Snail Mail – “Valentine” – The second album from Lindsey Jordan’s indie project was highly acclaimed by critics and builds from her amazing debut, incorporating strings, synths and other new sounds to go with her strong hooks. I only wish it was longer than 31 minutes and wanted more.

4. The War On Drugs – “I Don’t Live Here Anymore” – After a four-year wait, it was great to hear new material from one of the best bands in the U.S. For this release, their Americana-meets ‘80s Dire Straits sound feels more expansive. A great album to put on for background.

5. Liz Phair – “Soberer” – A much welcome musical comeback after an 11-year absence. Following up on her well-received autobiography, Phair’s new album is the perfect fusion of her early alternative work and her later pop-heavy albums.

1. “The Mandalorian,” again. The show continues to have surprise guests, like Boba Fett and Luke Skywalker, and even made space for a great dramatic turn for comedian Bill Burr as a conflicted former Imperial soldier.

2. Found a lot of interesting bands this year, like Russian rave act Little Big, weird pop artist Oliver Tree, YouTuber Dad, who is either a captured alien or one of numerous robots, who just wants to have millions of followers, Native American DJ Shub and Simpsons-based metal act Okilly Dokilly. The wife and kids are not enjoying my musical tastes at all this year.

3. “Reservation Dogs” is the most interesting show I’ve seen in ages. The main plot is about four Indigenous teenagers who are trying to get enough money to get out of their Oklahoma town and head to L.A. Somehow. in the mix, there is a terrible spirit guide who died because his horse landed on him, the mythological Deer Lady and adults who often aren’t the most helpful of people. Honestly, I never knew where any episode was headed and that was wonderful. Also, written, produced, directed and acted by mainly Indigenous people. Great work all around.

4. “What We Do in The Shadows” answers the old question of what if you had eternal vampire life but you were basically an idiot. A trio of vampires face everyday problems like they are petulant six-year-olds, but somehow still survive.

5. Guys on YouTube who know how to repair stuff are my favorite viewing. How do I fix plumbing? How do I fix the dishwasher? How do I install flooring? Somebody knows and posted it. Thank you for all your assistance.

1. The Beatles: Get Back – Directed by Peter Jackson. An in-depth and intimate look at the lead up to the final public performance of the Beatles on the rooftop of Apple Studios.

2. “All About Me!” – autobiography of comedy legend Mel Brooks. The audiobook version, read by Mel himself, is particularly engaging.

4. “Firstfruits” – by Cypress: Foolproof folkpop harmonies and a classically trained cellist. Guaranteed to make you cry or your money back.

5. “Red (Taylor’s Version)” – by Taylor Swift: Re-recording of Taylor’s 2012 hit album with some unreleased songs as well. As close to a masterpiece as they come.

1. Music by Black Pumas – I discovered them this year and absolutely love them. The music is super funky and fun.

2. “The Book of Longings,” by Sue Monk Kidd – no matter a person’s religious or nonreligious background, this book reminds us that kindness, love, compassion and acceptance are incredibly important to experience and share over money and political power – The Eminence Front…

3. “The Book of Joy,” by the Dalai Lama and Desmond Tutu – I am still reading, but it focuses on the gift of each moment, that life is never meant to be easy and that our attitude and perspective are what shape our experience in the grand scheme and make life beautiful.

4. Exhibits at the Cincinnati Art Museum – I visited again this month for my 40th birthday and was reminded of the importance of art in our life and that it is so key to make time to experience art for the pure joy of the experience. The museum is free to enter less special exhibits. The Simply Brilliant exhibit currently on display until February is a jewelry exhibit focusing on organic, bold jewelry artists of the 60s and 70s and is owned by local Cincinnatian Kimberly Klosterman.

It is insane to see in person – not to mention the museum’s permanent collections. Take a day trip and make time for the grounds around the museum and surrounding area as it overlooks the river from high above on a ridge – and lunch at Arnold’s Bar and Grill downtown.

5. Billy Strings – Seeing him was my first experience back at a concert since the pandemic, and didn’t disappoint at Buckeye Lake/Legend Valley. The show was outside and was divided into pods, which made me super comfortable to be able to enjoy the music without feeling like people were right on top of me.

6. The Beatles: Get Back – an incredible three-part documentary that shows a pivotal point in their career. I loved how you can see their process of creating as that is a mystical experience for someone like me who doesn’t play an instrument. It also delves into their relationships with each other where conversations explore John and Yoko regarding the dynamic of the band as a result.

4. TV – Only Murders In The Building