Vikings finally get bats going as they beat River Valley, 8-6 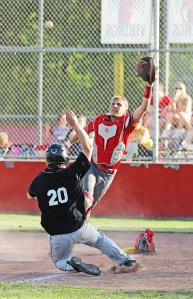 AID — The Symmes Valley Vikings might be late to the party, but when they get there they really party.

It’s been the Vikings’ habit all season to get their offense going in the late innings. They did it again as they beat the River Valley Raiders 8-6 in a non-league game on Wednesday.

Trailing 3-2 going into the bottom of the fifth inning, the Vikings scored 6 runs and then held on for the win.

“We played well but we always seem to wait until the late innings to get our bats going,” said Vikings’ coach Chad Renfroe.

“Stevenson threw the ball pretty well and we could have left him in but we have a big game (Thursday) at Western and we need everyone ready. We wanted to save their pitches.”

The Vikings are 16-3 overall and need a win over Western to win the SOC title outright.

Mason Stevenson went the first 4 innings and allowed just one hit, one earned run with 5 strikeouts and 3 walks. Brayden Webb Gott he final 2 outs for the save as Tanner McComas got the win in relief.

The Raiders broke  Bodie Louden singled, moved up on a passed ball and came home on a hit by Caleb Owens.

The Vikings’ Aiden Hieronimus was hit by a pitch, Logan Justice walked to load the bases and Levi Best had a 2-run single.

River Valley snapped a scoreless tie with a run in the top of the fourth.

Reid Haynes and John Santos singled and after a fielder’s choice Louden had an RBI single.

But the Vikings answered in the bottom of the inning with a pair of runs to take a 2-1 lead.

Webb doubled and scored on a hit by Levi Niece. Hieronimus walked and they moved up on a passed ball. Braden Corn hit a sacrifice fly, Ethan Patterson doubled in a run and after a fielder’s choice Logan Justice and Levi Best had RBI doubles. Best scored the final run on an error.

The Raiders came back with a 3-run rally in the sixth to cut the deficit to 8-6.

Lady Vikings catch the winning ‘virus’ as they take…