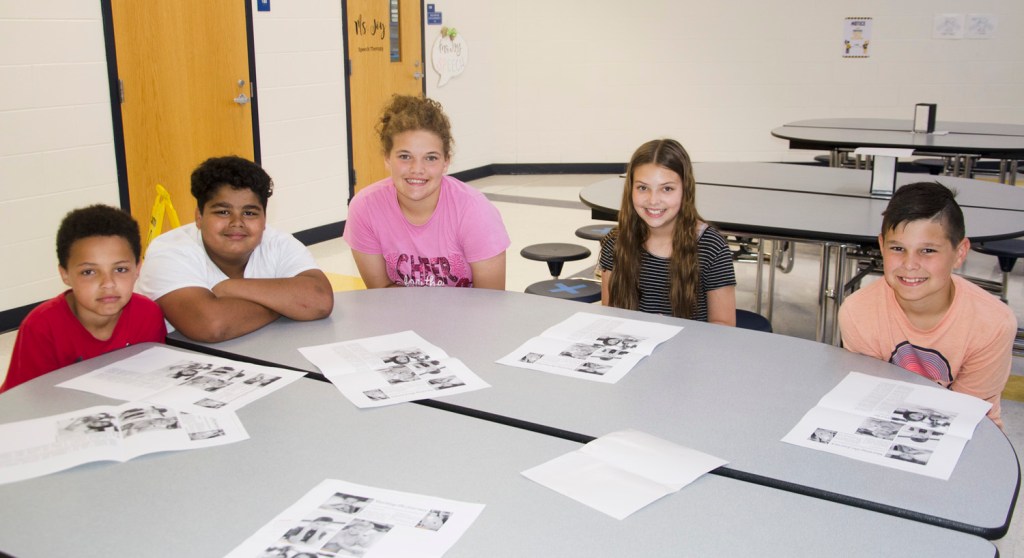 From left, Rayshaun Hall, Keondre Garred, Cassidy McComas, Mariah Kersey and Tyler Aliff, fifth graders at South Point Elementary School, graduated from the school this week. On Aug. 19, 2016, they were part of a group of kindergarten students the Ironton Tribune interviewed at the end of their first day of school. On Tuesday, the paper revisited them to get their thoughts as they prepare to attend South Point Middle School in the fall. (The Ironton Tribune | Heath Harrison)

When principal Chris Mathes, of South Point Elementary, went from room to room, gathering fifth grade students on Tuesday, they were unsure of what the reason was.

The group filed into the cafeteria, where they were seated at a table, introduced to a reporter from The Ironton Tribune and told, “You’re here because of something you did years ago.” 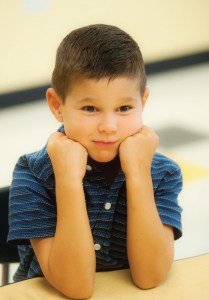 Tyler Aliff poses for a photo at the end of his first day of kindergarten at South Point Elementary School on Aug. 19, 2016. (Jessica St. James | The Ironton Tribune)

They were then presented with a copy of an article that ran in the paper nearly six years prior, titled “Starting the journey,” which featured a group of kindergarten students discussing their first day of school.

“I looked bored back then,” Tyler Aliff remarked, laughing at his photo from the big day, in which he is resting his head in his hands at the classroom table.

With the fifth graders set to graduate from the school at the end of the week, The Ironton Tribune decided to revisit the original group and find out their thoughts as they finished at the school and prepared for the leap to middle school.

Of the original 12 students who had been photographed or interviewed for the 2016 piece, many had moved and transferred to other schools over the years, with five finishing out in South Point — Aliff, Mariah Kersey, Cassidy McComas, Keondre Garred and Rayshaun Hall.

On Aug. 19, 2016, they were part of Courtney Esque’s class and talked with The Ironton Tribune at the end of the day, while enjoying cupcakes served by their teacher.

They had the typical feelings for the day — a little afraid at first, but quickly getting over it, while they were enthusiastic about their first bus ride and trying out the school’s playground.

“I wanted to talk about my new shoes,” Garred said, reading his quotes from the article.

When asked how it feels to be finishing the elementary school, it was mix of optimism and nostalgia.

They discussed their favorite things from the school, with Aliff, Garred and Hall picking gym class as the standout.

“Probably my teachers,” McComas said. “Especially Mrs. Jackson. I had her in first grade.” 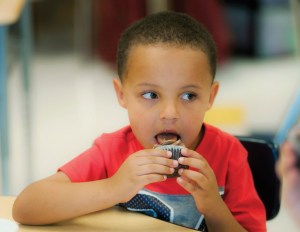 Rayshaun Hall enjoys a cupcake at the end of his first day of kindergarten at South Point Elementary School on Aug. 19, 2016. (Jessica St. James | The Ironton Tribune)

The group had a vastly different elementary school experience from past generations, with the COVID-19 pandemic hitting in March 2020, their third grade year, and Ohio Mike Dewine ordering all public schools in Ohio closed and shifted to remotely learning for the remainder of that school year. When they returned for fourth grade, mask mandates and strict health safeguards were in place, lasting into this year, drastically changing the school environment.

“It was awful,” Aliff said, a sentiment shared by the group.

“Awful” and “horrible,” the others chimed in.

Garred spoke of the stay-at-home portion of the year.

“The part where we got out was fun at first, but then it got bad, especially my sleep” he said. “I played games all night and slept all day. I barely saw the light of day.”

McComas said not having in-person classes was difficult for her.

“I feel like I wasn’t motivated as much,” she said.

In the 2016 interview, students were asked what they wanted to be when they grew up, with answers ranging from a doctor to a police officer to a dolphin trainer.

The fifth graders were asked what they hoped for, as far as a career. Some were undecided and a few had some ideas.

“A brain surgeon,” Kersey, who was photographed in the kindergarten piece showing off her new backpack, said. 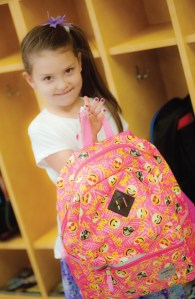 Mariah Kersey shows off her backpack on her first day of kindergarten at South Point Elementary School on Aug. 19, 2016. (Jessica St. James | The Ironton Tribune)

One of the kindergarten answers got a big laugh from the students as they were reading the article.

“Cassidy said she wanted to be a mermaid!” one of the group pointed out.

“Oh, wow,” McComas said, laughing at her response in the article.

“Well, she was in kindergarten,” Mathes said. “You’re not the only kindergartener who wants to be a mermaid, I promise you.”

All of the students said they were looking forward to the first year of middle school and taking part in extracurricular activities.

McComas and Kersey said they wanted to participate in band, while Hall said he hoped to play football.

“And I want to play basketball,” Garred said.

As for the original interview, two of the group said they definitely remembered taking part in it on their first day.

“Were you surprised?” Mathes asked them, of being brought to the cafeteria for the follow-up piece.

“I thought we were in trouble!” Garred said.

Mathes said he kept the purpose from the group until they saw the copies of the original article.

“I didn’t tell them anything,” Mathes said, laughing. “And he was saying ‘Please don’t call my dad!’”

Three classes, consisting of 49 fifth grade students, graduated from South Point Elementary School this year, with a ceremony held at the school on Friday.