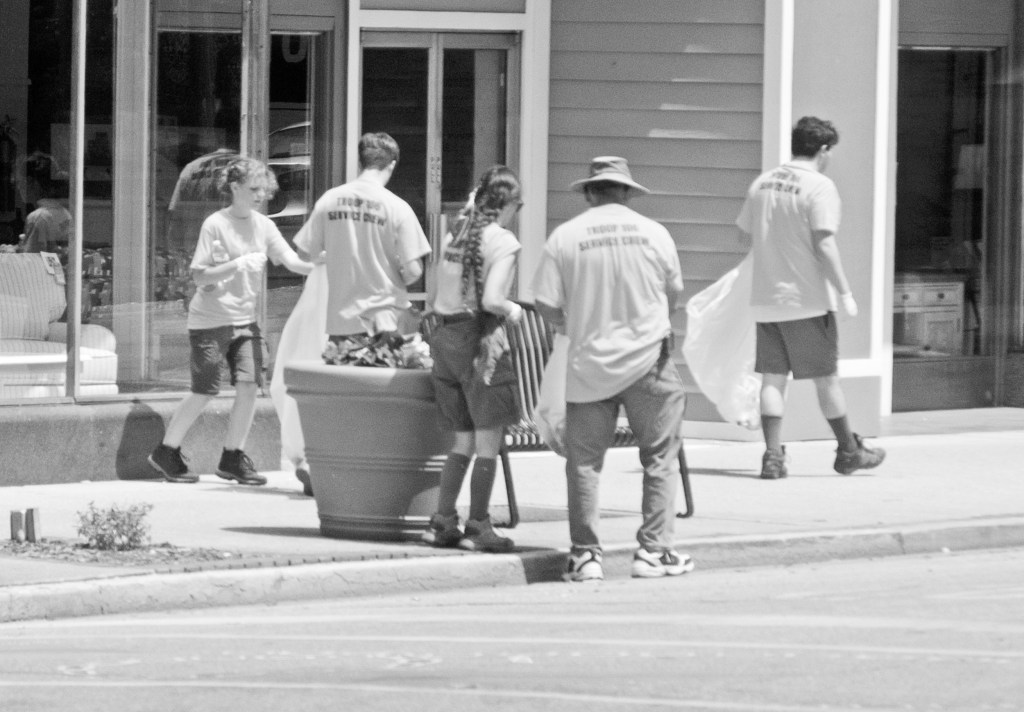 Members of the Troop 106 Service Crew, left, and DJ Cohenour both worked to clean up trash left behind from Monday’s Ironton-Lawrence County Memorial Day Parade. (The Ironton Tribune | Heath Harrison)

When the Ironton-Lawrence County Memorial Day Parade crowd cleared out on Monday afternoon, you could easily tell there had been thousands of people downtown.

As is customary for a large gathering, there was a mess to clean up.

Whether it was unclaimed candy in the street, tossed from the floats, or bottles and cups and wrappers left on the sidewalks and windowsills, an hour after the parade, the route was littered with the aftermath of the event.

Within an hour, DJ Cohenour was on the job.

Cohenhour has become a familiar face downtown, regularly seen with his cart, decorated with an American flag, which carries a tiger-striped trash can. He spends his time volunteering to clean up the area and, on Monday, he was quickly going about Center Street, clearing it of the larger items.

And not too long after Cohenhour made his pass, Scout Troop 106 also came on the scene.

Wearing orange shirts, members of their service crew fanned out from a truck and collected trash from along the parade route’s sidewalks and streets.

Within a few hours, downtown was back to its normal look, and the trash left over from the parade was gone, with an added assist from the city street sweeper working on the holiday.

We thank all involved for their efforts. They could have easily gone home and cooled off from the 90-plus degree temperatures. Instead, they chose to give their time to the community to keep the city beautiful.

And we urge everyone to respect their work by doing your part to pick up after yourself in public spaces.