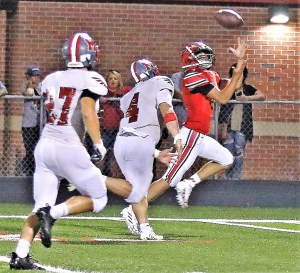 PEDRO — The Rock Hill Redmen made some big plays. But it was the little plays that proved to be their downfall.

The Redmen put themselves in position to score on several occasions but couldn’t finish the drive and the Minford Falcons used a dominating ground game to post a 33-14 win in the season opener on Friday.

“We had a couple of big plays and didn’t capitalize on them. We could have been ahead at the half,” said Rock Hill coach Mark Lutz.

“Minford was a good team. They were strong and physical. We would have the right call on and just miss one block and they were there to stop the play.”

Jeff Pica had a big game with 206 yards on 18 carries with a touchdown as the Falcons rushed for 356 yards. Tyson Kingery had 89 yards on 13 carries and two scores while Peyton Caudill added 59 yards on eight attempts and a TD.

After a scoreless first quarter, Minford went 56 yards in 8 plays to score not including a pair of holding penalties.

Rock Hill got a 79-yard kickoff return by French to the Minford 10, but the drive stalled and the Redmen failed to capitalize when a 27-yard field goal went wide right.

Pica bolted 72 yards on the ensuing play to the Rock Hill 8-yard line. After no gain,  Caudill scrambled the final 8 yards and Myles Montgomery’s conversion kick made it 13-0.

Rock Hill used a 77-yard run by French to the 2-yard line but again the drive failed to produce a touchdown as the Redmen were stopped just shy of the end zone.

A 50-yard run by Pica on first down got the ball to the Redmen 49. The drive stalled at the 28 and Montgomery attempted a 45-yard field goal as time ran out. The kick was short and off to the left, but a roughing the kicker penalty moved the ball 15 yards closer and Montgomery connected on a 30-yard field goal on an untimed down and the lead was 16-0 at the half.

After forcing a short punt, Minford had the ball at the Redmen 34 to start the second half. It took just four plays to score with Kingery carrying three times for 27 yards including the final yard for the touchdown.

Rock Hill gambled fourth down and went for the first down on its next possession only to come up two inches shy of its destination.

The Minford drive reached the 25 before it stalled and Montgomery hit a 42-yard attempt for a 26-0 lead at the 2:36 mark.

Rock Hill didn’t quit and put together a 55-yard, six-play drive that culminated on a 34-yard pass from Brayden Adams to French. Matthews kicked the conversion for her first varsity point and it was 26-7.

The Falcons answered with a 68-yard, nine-play march that saw Kingery got the final 13 yards for the score and it was 33-7 with 6:22 left.

Rock Hill used a 25-yard pass to Chanz Pancake to reached the Minford 12 and four plays later Chase Delong bulled his way into the end zone from 3 yards out. Matthews kick set the score at 33-14 with 3:57 to play.