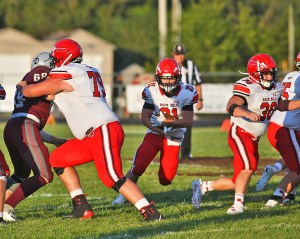 Rock Hill Redmen running back Chase Delong (21) gains some of his 69 yards as Andrew Medinger (79) and Levi Jiles (30) open a hole. The Redmen stunned Vinton County 21-20 in overtime on Friday. (Robert S. Stevens of The Gold Studio in Ironton) 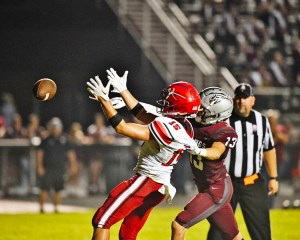 Rock Hill Redmen split end Chanz Pancake (15) can’t get away from a Vinton County defensive back to make this catch during Friday’s game. Rock Hill won 21-20 in overtime. (Robert Stevens of The Gold Studio in Ironton)

McARTHUR — Someone forgot to tell the Rock Hill Redmen they were heavy underdogs.

The Redmen used a ball-control offense and a pressure-packed extra point kick to upset the Vinton County Vikings 21-20 in overtime on Friday.

The Redmen had the ball for more than 35 of the 48 minutes of Friday’s game against Vinton County as they ran 55 plays to just 29 for the Vikings.

“We did a good job and controlling the football, but we missed some blocks in spots or we would have scored more times,” said Rock Hill coach Mark Lutz.

“But our kids played hard and fought for every yard on offense and we played pretty good defense in spots. Each time we scored, I think we let up a little mentally. But I’m proud of their effort.”

Rock Hill (1-1) would use much of the clock to score only to have the Vikings score in rapid fashion.

The first quarter was scoreless although Rock Hill began its scoring drive in the quarter and carried it deep into the second quarter.

After a holding penalty on first down put the ball back at the 25, the Redmen got a pass interference call on the next play. Rock Hill then ran off 12 rushing plays that culminated on a 5-yard run by Levi Jiles behind the blocks of Chanz Pancake and Brock Friend.

But it took the Vikings just two plays to answer as Garrett Brown shook free on a 66-yard touchdown run. Cooper Haybrun’s conversion kick tied the game with 6:08 left in the half.

The third quarter was scoreless as Rock Hill ran 13 plays to just 6 for Vinton County.

“Oh, I was going to get into the end zone. There’s no question about that,” said Friend of his first career touchdown.

Despite only 36 seconds left in regulation, Molihan returned the kickoff to the Rock Hill 42. Molihan threw an incomplete pass but a personal foul penalty on the play gave the Vikings a first down at the 28.

Molihan ran for 15 yards and then Lane Haybrun went for 7 yards to the 6-yard line. Molihan threw an out pass to Dawson Brown for 5 yards and then scored on a quarterback sneak the next play as time ran out.

The Vikings got the ball to start the overtime and scored in two plays as Brown and Molihan each ran 10 yards with Molihan getting the score. But a bad snap on the conversion kick forced Haybrun to fall on the ball.

Just like in regulation, the Redmen nickel and dimed the Vikings as they used 7 plays to score.

A 2-yard run by Chase Delong converted a third-and-2 for a first down.

After an incomplete pass on first down, French ran for 3 yards and Friend ran 4 yards to the 3-yard line. But a penalty pushed the Redmen back and they were faced with a fourth-and-goal at the 8.

Quarterback Brayden Adams hit French with an 8-scoring pass to tie the game and Matthews split the uprights with a booming kick that gave the Redmen the stunning win.

Matthews — an All-Ohio guard for the basketball team who has committed to Georgetown — didn’t let the pressure-packed kick affect her job.

“I already made two before, so I was kind of prepared for it. But I was also getting locked down because it came down to the game,” said Matthews.

“I calmed myself down. I’m used to it, being under pressure playing so many sports. I was just telling myself to calm my nerves, ease my mind and then I just went out there and do what I do.”

Rock Hill had 223 total yards with 215 coming on the ground. The running game saw seven different ballcarriers led by Delong with 69 yards on 14 attempts, French 62 yards on 15 tries and Jiles 48 yards on 13 carries.