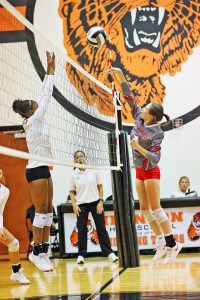 Symms Valley’s Kayley Maynard (right) tries to get a kill at the net as Ironton’s Khamil Martin (left) goes for the block. The Lady Vikings beat the Lady Fighting Tigers in 5 sets on Monday. (Josh Wilson Photography/Facebook)

John Lennon and The Beatles had a hit song with “Come Together.”
The Symmes Valley Lady Vikings had their own hit on Monday as they came together for a five-set volleyball win over the Ironton Lady Fighting Tigers.
The Lady Vikings won 12-25, 25-17, 21-25, 28-26 and 15-7 in the tiebreaker set.
“These girls played really hard tonight,” said Lady Vikings’ coach Amanda Carpenter. “I’m so proud how they came together and worked as a team.”
Hailee Beckett had a huge all-around game with 19 points including 5 aces, 2 blocks, 10 digs and 3 kills.
Kaitlin Maynard had 32 assists, 2 kills, 5 blocks and 18 digs, Mary Beth Back led with 40 digs, Desiree Simpson had 10 kills, a block and 10 digs while Kayley Maynard had 12 digs and 3 blocks.
The Lady Vikings junior varsity won in two sets.