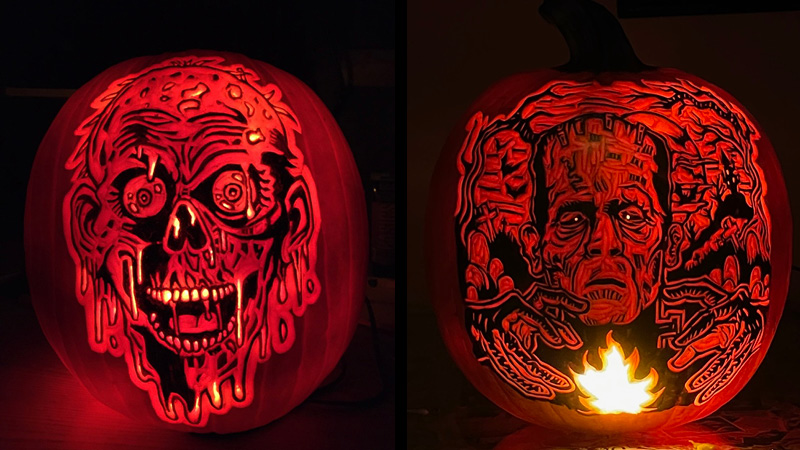 Local artist Sean Kelley switches up his artistic endeavors each fall with something that’s perfect for Halloween: pumpkin carving.

Many classic horror and pop culture icons serve as Kelley’s inspiration for his pumpkin art, including Frankenstein’s Monster and Church the cat from Stephen King’s classic novel, “Pet Sematary.” Kelley says his artform of pumpkin carving is unique in the area, and he’s been doing it for years.

“I would say that around this area, I don’t think I could be touched with pumpkin carving — I don’t know many people that do it, is the thing,” he says.

Kelley, whose choice medium is linoleum printmaking, first draws designs on his pumpkins with a marker before carving.

“I shave it instead of making a hole in it; I’m trying to get my value through just shaving it,” Kelley says.

While he doesn’t sell his pumpkin carvings, choosing instead to simply challenge himself year after year, Kelley’s linoleum prints can be found for sale at local galleries and expos, including The Jewel Gallery in Ashland.

Kelley has been creating for years. Attending Ohio University, with his professors serving as inspiration, Kelley graduated with a bachelor’s degree in painting, but he says he always gravitated more to printmaking, forming a connection with his prospective audience.

“It was just cooler,” he says. “One thing I liked about printmaking is it’s more accessible to people; you can kind of sell pieces cheaper. Some people that want to buy art are not going to be able to buy a $1,000 painting, but they can buy a $150 print.”

Kelley’s latest project is a mythology series, featuring women of various myths from around the world and how different cultures view them. One subject in the series is Medusa, of popular Greek myth, and Kelley is using the piece as a way for her to reclaim her identity.

“Medusa has a sad backstory, but I didn’t want to show her as a victim, which is what she is — I gave her more power,” he says. “I took Perseus’ wings that he used to fly over to the island Medusa was on, and I gave them to her.”

Another mythological being Kelley is studying in his work is Kali, a goddess of Indian and Hindu culture. This piece was originally inspired by Edwin Talmadge Callihan, a college friend of Kelley’s, who publishes “Gravely Unusual” magazine.

“I bought a book from Edwin about mythology of the Indian culture, and he said I should do a print of Kali,” Kelley says. “As soon as he said that, I said I was going to do that because it’s fun to draw that aesthetic.”

Kelley partnered with Callihan and loaned his printmaking skills to publish the first few issues of “Gravely Unusual.” Callihan saw Kelley’s pumpkin carvings on social media and reached out about a collaboration.

“I hadn’t talked to him in a couple of years,” he says. “He asked if I wanted to work on a comic with him, a comic that became a magazine. It’s grown a lot since the first two issues we did.”

Kelley said most of his best work comes from working with Callihan, continuing to inspire Kelley’s work today.

“When Edwin and I worked on ‘Gravely Unusual,’ our stories usually revolved around women getting revenge,” he says. “I’m not aimless, usually I can get ideas, but I can draw whatever comes up.”

Another project Kelley says he’d love to get involved with is painting murals.

“I would like to do some murals,” he says. “I talked to the mayor about doing one on the flood wall just as a trial. On the weekends, all I’m doing is making art.”

Kelley does accept commissions, either through his social media pages or through inquiries at The Jewel Gallery.

“They’re commissions, but at the same time, I still sell them because when you make a print with linoleum printmaking, the artist has their hand in it—in each print,” he says. “It’s not like when you’re buying the print, you’re buying a painting, like an original piece.”

Though he says he has no idea what it’s like, Kelley equates the art of creating to giving birth.

“It’s an outward manifestation of something that you make,” he says. “I just love the medium. I have to limit myself because when I’m carving, you can only get so much detail. I try to simplify but at the same time get better as I add more detail to my work.”

As Kelley’s art evolves, he’s also getting better at marketing and selling his work, he says, thanks in large part to The Jewel Gallery and its owner Bri Reynolds.

“I’ve done it before, but not on this scale,” he says. “Usually when I sell stuff, I just end up buying more art just to help the whole community.”

“Keep making art. It’s good for the community,” he says.

Edwin Talmadge Callahan has always been interested in comics and horror movies and decided to merge those passions — leading to the creation of “Gravely Unusual” magazine. Working primarily as a writer, he knew he needed help with art for the budding publication, so he reached out to former Ohio University classmate Sean Kelley.

The original plan was to create a type of anthology comic, similar to “Tales from the Crypt,” but the more zines and independent publications Callihan read, the more inspired he was for a magazine format. Callihan put out an additional open submission call, and with the support he received, he and Kelley published the first issue of “Gravely Unusual” in August 2018.

While Kelley has since ventured on to other projects, the magazine has grown over the years. Because a limited run of 150 copies is printed of each issue, available online or at Conquest Books in Ashland, Callihan says there’s an exclusivity to it.

The magazine’s content is mostly horror-related, but that includes literary and speculative horror ideas, and branches into sci-fi and fantasy. It’s modeled after classic publications — such as “Heavy Metal” magazine and “Midnight Graffiti” — from the golden era of magazine horror, Callihan says.

While Callihan started publishing “Gravely Unusual” himself, he now has a publishing partner; the two merged their content to create Castaigne Publishing. Callihan says that’s how those interested in creating for the magazine can now contact him.

“We have a website and an email, and we’re looking to do not just the magazine, but if you have novel ideas or comic ideas, things like that, we want people to submit to us — anybody that feels like we’d be a good fit and they can’t find a home for their work anywhere else,” he says.

The magazine is truly independent, not relying on any third-party distribution. It’s printed locally in Morehead, Kentucky.

“Everything strictly comes from us,” Callihan says. “We try to use everything from a grassroots and independent level, so we can control the content and give the artists and writers the most money that they can get out of it.”

This also means Callihan has creative control, one of his favorite aspects of the magazine.

“The end product is what I put together,” he says. “You get to push stories that you don’t see otherwise. So, you can blend genres and have them juxtaposed against different ideas. It’s fun to have that full complete control over it.”

Callihan has a network of artists and writers, including Kelley. He includes their work as much as possible, especially those who may have trouble publishing their work elsewhere. Callihan also writes movie and comic reviews for the magazine and interviews celebrities and anyone related to horror culture.