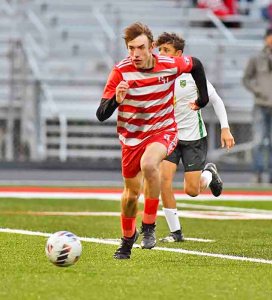 PEDRO — The Rock Hill Redmen are off and kicking.

The Redmen began the Division 3 sectional soccer tournament on a high note with a 6-1 win over the West Union Dragons on Tuesday.

Sam Simpson scored a hat-trick to lead the offense, Brayden Adams had a goal and 2 assists and Christian DePriest and a goal and an assist.

Adams scored the first goal with an assist from DePriest 6:46 into the game.

Simpson scored with an assist from Adams at the 11:38 mark and the lead was 2-0 at the half.

DePriest scored an unassisted goal at the 47:03 mark of the second half and the lead was 3-0.

Simpson scored the next two goals — Connor Blagg had an assist on the first goal — and the lead was now 5-0 with 73:58 on the clock.

Rock Hill’s final goal came about a 2 minutes later as Dawson Lewis found the back of the net with an assist from Adams.

West Union avoided the shutout when Ethan Cantrell scored on a penalty kick with 76:36 on the clock.

Rock Hill (8-8-1) travels to North Adams on Thursday in the sectional finals.