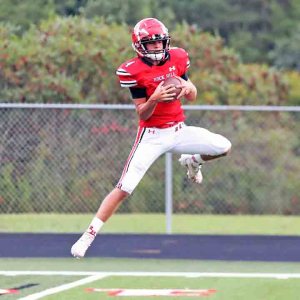 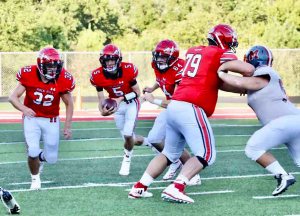 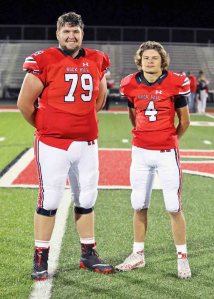 PEDRO — It has been somewhat of a surprise season for the Rock Hill Redmen. And there’s a big reason and a little reason for that success.

The big reason is 6-foot-5, 330-pound senior lineman Andrew Medinger. The little reason but in size only at 5-8, 155 pounds is senior running back and defensive back Kordell French.

Before the season there were many predictions that the pointed toward the Redmen not winning a game. They finished 5-6 with a couple of games that could have gone the other way and they pulled off the major upset of the season by rallying from 31-14 to down then-unbeaten Gallipolis 35-31.

“After the game, it was a little weird. It seemed like we had done something illegal,” joked Medinger about the upset win over Gallipolis.

The upset win was just a part of what has silenced some critics.

“We definitely surprised a lot of people,” said French.

“I think it’s been a great season. I think we surprised a lot of people. We came out a lot stronger than people thought we were and our (senior) class was overlooked, but we have always produced,” said Medinger. “I think this season has been a direct reflection of our class. It’s been easy going. What I mean by that is it hasn’t been like a job. There never was a time I thought, ‘boy, this is boring.’ This is fun. We’re all friends and none of us are out here to win medals.

“And one thing I can say about this group, we never quit.”

Although French has had one of the best all-around seasons in the program’s history, he has always been unassuming and never tries to be flashy.

“I don’t like to go around bragging. That’s just not me. I like to give credit to the guys up front. They’ve done a great job and Andrew is a big key to that, too,” said French.

“It kind of comes natural. To be honest, I just take my time. I’m going fast, but it just seems like I see everything slower.”

During his sophomore year, French intercepted a pass and was returning it when suddenly his knee gave out. He had torn his ACL and was lost for the season.

French admits that the injury was in the back of his mind last season and still lingers once in a while even now.

“It definitely at first was something I thought about and it kept me from reaching my potential. It’s nothing I’ll fully get over, but it’s my senior year and if something does happen, I can hang it up with the stats I have now.

Speaking of statistics, French leads the Redmen is rushing with 1,112 yards on 112 carries for a 9.9 yards per carry average. He also has a team-high 10 receptions for 175 yards and 3 touchdowns.

Defensively, Rock Hill had 5 interceptions and French has all of them. And as a kick returner, he has 15 kickoff returns for 425 yards and a touchdown.

He also leads the team in scoring with 12 touchdowns and 74 points.

“Whenever I get my hands on the ball is what I like. I like to think I’m a lucky guy. I’m in the right position at the right time,” said French.

Rock Hill head coach Mark Lutz said French’s versatility and athleticism make him a dangerous weapon on both sides of the ball.

“Kordell plays so hard and he has such great vision,” said Lutz. “He’s a great athlete who can do a lot of things on the football field. And no matter what you ask of him, he just goes and plays and doesn’t say a word.”

Medinger is not only on track to be the valedictorian of his class, the loss of linemen to graduation has led Lutz to insert his big senior on defense instead of platooning him to keep him rested for offense.

The offensive line of Landon Harper, David Jenkins, Logan Short, Chanz Pancake, Zaylor Gregory, Zach O’Bryant, Medinger and his younger brother Daniel have been a key to the running game.

Although Medinger has performed well on both sides of the ball, Lutz said his intangibles are what make him a key player for the Redmen.

“Andrew is extremely intelligent on and off the field,” said Lutz. “He is also a leader by actions instead of words. He never misses workouts or practices.”

Medinger is a fan of the movie “Tombstone” and his favorite line is, “You tell ‘em I’m coming, and hell’s coming with me, you hear?”

Well, Medinger did come with a fury this season and he very well have been hell for some opposing linemen. He was often double teamed and on a few occasions drew a triple team.

And he has loved every minute of it.

“I never had to make any adjustment. I’ve always wanted to play defense. I really like playing defense. There are a lot less rules and you get to toss people around,” Medinger said with a chuckle.

“That’s kind of a reflection of what kind of a player you are. I figure if it takes two or three people to block me, that’s two of our people who are coming free who aren’t being blocked,” said Medinger.

Neither Medinger — who is considering law school — nor French is really entertaining any ideas of playing at the next level. Instead, they are more concerned about getting an education and moving forward with their lives.

“I’d love to be about three inches taller and be 200 pounds,” said French. “(Playing college football) has definitely crossed my mind, but I don’t really see a situation where I go and play and get hurt and take a chance.”