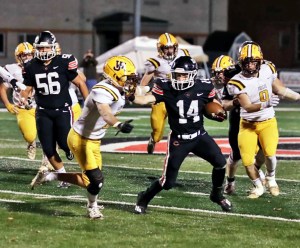 Coal Grove Hornets’ Kaden Murphy (14) fights off a West Jefferson defender during Friday’s Division 6 playoff quarterfinal game. Murphy had 2 touchdowns in the first quarter of a 47-40 Coal Grove win to advance to the regional semifinals. (Photo By Tim Gearhart)

COAL GROVE — Chase Hall recorded four touchdowns and Kaden Murphy added two of his own as the Coal Grove Hornets staved off a furious comeback from the West Jefferson Roughriders to win 47-40 at Lemaster Stadium on Friday night.

The Roughriders, who trailed 39-13 with 11:56 remaining in the game, recovered three-consecutive onside kicks and quarterback Austin Bruscher threw for 205 yards and 4 touchdowns in the final period to take a slim 40-39 lead with 7:08 on the clock.

Coal Grove had only ran one offensive play in the quarter before the chaos began, which was a 4-yard touchdown run by Hall to begin the final quarter of play.

When the Hornets got the ball back, they methodically marched down the field as Hall ripped off a 15-yard gain to put the Hornets into Roughrider territory and then finished off the 6-play drive with a 32-yard burst for the game-winning score.

The Roughriders would get the ball back and manage to work their way down the field to the Hornet 30, but Bruscher’s fourth down pass towards the end zone was batted away to seal the win for the Hornets.

The first quarter was practically dominated by the Hornets as the defense held West Jefferson to a negative four yards in the quarter.

Kaden Murphy provided the offensive fireworks in the opening frame, taking a pitch to the home sideline and diving into the end zone to give Coal Grove an early 8-0 lead with 8:42. He then capped off a five-play drive by fielding another pitch from quarterback Whyatt Mannon, got around the corner, and streaked down the Hornet sideline for a 20-yard score.

Murphy’s score was set up on the prior play, as Steven Simpson busted through the West Jefferson defense on an inside trap play for a 30-yard gain.

One of the key moments in the first half came when West Jefferson recovered an onside kick in the second quarter. They managed to drive to the Coal Grove 1 with 1:49 to play in the half, but were stuffed on a fourth-and-goal play, giving the ball back to the Hornets to preserve a 23-7 halftime lead.

Hall finished the game leading all rusher with 294 yards on 35 carries. Murphy added 58 of his own and Simpson had 52 yards on the night.

Coal Grove now advances to the regional semifinals and will face the top-seed Fort Frye Cadets. The site of the game will be determined Sunday.