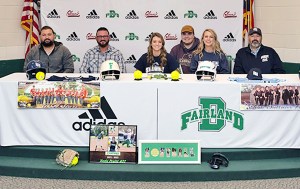 PROCTORVILLE — John Lennon once sang the song “Power to the People.” It makes you wonder if he had Katie Pruitt in mind when he wrote it.

The song probably didn’t have Pruitt in mind since it was written in 1971, but it’s easy to make the connection with the Fairland Lady Dragons’ slugging shortstop who signed a letter-of-intent Tuesday with the Shawnee State University Bears.

Pruitt is not only a good defensive player but she is a power-hitting shortstop, and it’s that home run production that attracted the Shawnee State coaches.

Pruitt admitted that her power was the reason Shawnee State coaches became interested, but she said besides hitting for power she has a different approach each time she bats according to the situation.

“I honestly just try to hit the ball, just put it in play whether we need a ground ball, a sacrifice hit,  it all just depends on the situation and where my teammates are on the bases,” she said.

Pruitt has played shortstop and second base and is projected to be considered for a middle infield spot.

“Coach said I was going to have to fight for a middle infield spot,” said Pruitt. “I’ve played everywhere. My favorite is probably shortstop or second base.”

Although being a power-hitting shortstop might have drawn SSU to Pruitt, she said the atmosphere and people at Shawnee State is what won her heart.

“Shawnee was super welcoming. When I went there the coaches just automatically clicked with me. They made me feel really welcome and some of the students introduced themselves while I was there and, just as a high schooler, I thought that was really special and I felt like that I could make connections there,” said Pruitt.

Shawnee State’s overall program and visions for the future were other factors that attracted Pruitt to the Bears.

“The program is really good. Coach is trying to get us a new field, new locker rooms and other things. I think that’s really important for us as a team and for team bonding and getting to know each other, especially at the beginning.”

Pruitt played volleyball and used to play some basketball before turning most of her attention to softball.

“Softball has been favorite. I have literally loved it since tee ball. I’ve played it my whole life and it’s what I’m best at and I feel like I’m at my best when I’m around my teammates,” said Pruitt.

The Lady Dragons are expected to have a team that could challenge for the Ohio Valley Conference title this season. That is one goal Pruitt would like to achieve along with another goal even though she said that goal isn’t quite clear.

“I want to set a high school record. I don’t know which one, but I want to set one whether is home runs or whatever,” Pruitt said with a laugh.

Pruitt works at her game and especially her hitting. She said getting a chance to hit batting practice with Morgan Zerkle who played at Marshall and is now an assistant coach at Miami, Ohio.

“I used to hit with Morgan Zerkle and she plays pro softball which is really cool,” said Pruitt.

“I learned how to stay positive. She’s focuses on your mental health and how you think throughout the game and develop your softball IQ and I’ve learned a lot of that from her.”