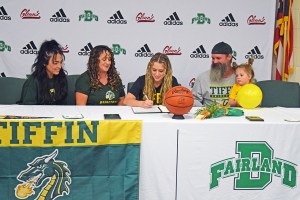 PROCTORVILLE — Maybe some scientist at Tiffin University has developed his or her own style of cloning. 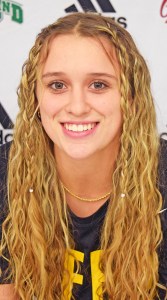 With West Virginia State and the University of Rio Grande offering invitations to join their programs, Hinkle elected to sign a letter-of-intent on Thursday thanks to the link between Buchanan and Mason.

“The coach Josh Mason reminds me of coach Buchanan a lot and I already loved him from the start from that point on,” said Hinkle.

“And it’s just a great environment up there. I just love the way it looks. It’s really a compact school. Everything is right there. I don’t have to walk far. It’s just right there for you.”

Hinkle was first team All-Southeast District last season as she averaged 16.2 points a game and helped the Lady Dragons reach the Division 3 regional title game. She said signing with Tiffin presents her with a big opportunity.

“They’re actually going to be losing their starting point guard so I may get to start or I’ll get to play a lot of time for sure which is really good,” said Hinkle. “They say it snows up there really bad up there so that’ll be fun.”

Going from high school to an NCAA Division 2 program is quite a step up, but Hinkle said she is excited about the challenge of playing at the next level.

“It’ll be more fast-pace. I haven’t seen them play but I’m going to go watch them,” said Hinkle. “We’re starting to play faster now and it’s like hard for us sometimes, but we’re getting the hang of it. And we really like playing fast. It’s so much easier.”

Hinkle started playing basketball at a young age and fell in love with it immediately. She said it was also at an early age that she knew she had to play college basketball.

“I started when I was in second grade for the little league they have at that school and it was really good to start then,” said Hinkle. “Probably when I was really little I decided I want to play college basketball. I just really loved it. I was like I need to go play and keep playing until I can’t play anymore.”

But she has spent most of her time focusing on basketball.

The biggest influence for Hinkle has been her mother, Jessica Rudd.

“She’s been my biggest supporter, always being there for me,” said Hinkle.

The Lady Dragons are poised for another big season this year that Hinkle thinks can culminate with a state tournament appearance. She said signing early will help avoid distractions although she admits it really hasn’t been a problem.

“I don’t have to worry about contacting other coaches. I can just focus on one school. It’s perfect,” said Hinkle. “I never cared about that (coaches watching her play). I never worried about that. Even before people were watching me. I just played the way I play and it was fun.”

Hinkle plans to major in the medical field.