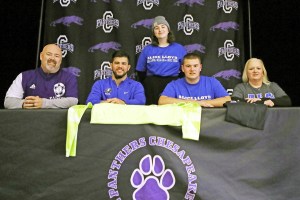 CHESAPEAKE — Entering into the basement is the best way Eli Hayton believes will get him to the penthouse.

The Chesapeake Panthers’ senior goalkeeper is looking forward to playing for the upstart Alice Lloyd Eagles program after signing a letter-of-intent. 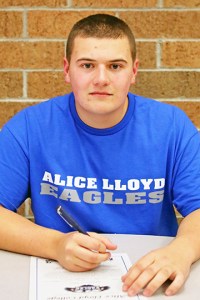 Hayton attuned several recruiting camps such as Cumberland College and Marshall University, but he settled on Alice Lloyd for several reasons.

“I just felt at home at Alice Lloyd. I felt comfortable there,” said Hayton who then point to the biggest reason as he got some help from his father Brian who is also the Panthers’ head coach.

“Me and my dad looked through a lot of colleges together and he told me about Alice Lloyd and how they recently started a soccer program and I thought it would be cool to go and help them build it up.”

Hayton has the experience to play for the Eagles and help elevate the program.

With the relatively new program, Hayton said coach Juan Lander told him he had a great opportunity to play for Alice Lloyd.

“I think they have a couple of goalkeepers, but when I went there they told me I definitely would get some playing time,” said Hayton. “My first goal is to be the starting goalkeeper. I’d definitely love to start there. And I just want to work hard there.”

The one thing that Hayton wants to avoid is an injury. He suffered an injury this past season and was forced to the sidelines for the first time in his career.

“This is the first year I had a major injury in soccer. I got a concussion,” said Hayton. “That’s the first time I’ve ever had that. It was brutal because I wanted to play. I was out for two games and it was hard to sit thee and watch and not play.”

Hayton — who enjoys playing guitar and soccer — is planning to major in Kinesiology.