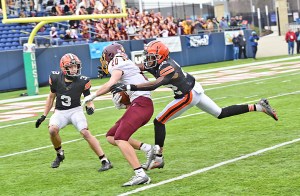 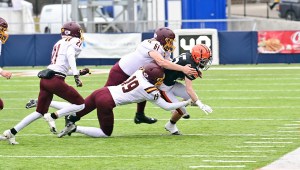 CANTON — Just another wedding for the bridesmaid.

The Ironton Fighting Tigers ran onto the Tom Benson Hall of Fame Stadium Field on Friday morning looking to become a bride for the third time.

But in a wild high-scoring affair, the Fighting Tigers were left standing at the altar for the 9th time and third in the past three years as the South Range Raiders took a 53-27 win to claim the Ohio High School Athletic Association Division 5 state football championship.

Ironton head coach Trevon Pendleton said penalties and turnovers are the key in big games and those two factors hurt his team’s chances.

“We realize that’s where most games are won, especially as they get bigger and bigger. We fell behind, we had to change our approach, and we had to play from behind after digging ourselves a hole there early on,” said Pendleton.

“Some of that comes from playing a good opponent. The majority of the penalties today were because of that. They put us in bad positions. A few of them at the end, the deadball personal fouls, are what we call unforced errors. Ten penalties for almost 100 yards is very difficult to overcome. You never want to see that.”

Although the Ironton’s running game was limited to just 46 yards, quarterback Tayden Carpenter was 21-of-35 for 325 yard and four touchdowns and wide receiver Ty Perkins caught seven passes for 121 yards and two scores.

But Ironton’s 389 total yards weren’t close to the 564 total yards amassed by the Raiders as quarterback Billy Skripac was 13-of-25 for 335 yards and three scores while running 12 times for 57 yards and there more TDs.

Running back Blake Ewert carries 19 times for 142 yards and a score as the Raiders piled up 225 yards on the ground.

“Defensively, you have to play with great eye control and leverage all the time. You either do that, or you don’t. No matter what they are doing offensively, it’s about what we are doing defensively,” said Pendleton.

“If we are doing the right things and handling our business, we’re always going to be in the right position. We weren’t many times today.”

Skripac said a big key for his team was a to match Ironton’s physicality.

“We knew Ironton was big. Just looking at them they had multiple D1 commits. We’re as physical as any team in the state. They were physical as well, but I’d say that when the Raiders play as a team, that we’re more physical than anybody,” said Skripac.

The start of the game looked like it would be a shootout but a couple of Ironton mistakes erased some chances for them and in turn provided the Raiders with golden opportunities that they were able to take advantage.

A 68-yard catch and run by Shane Lindstrom on the third play of the game got the ball to the Ironton 15. Three plays later Skripac ran 7 yards for the score and Logan Butcher’s conversion kick made it 7-0 and the 8:30 mark.

It took Ironton (15-1) all of 17 seconds to answer when Carpenter faked a handoff on their first play from scrimmage and hit tight end Lincoln Barnes who was wide open. Barnes made the catch and outran the defense into the end zone for a 66-yard scoring play.

Evan Williams’ conversion kick tied the game with 8:13 on the clock.

After a 21-yard punt, Ironton had the ball at the Raiders’ 30 but couldn’t moved he ball and turned it over on downs.

Skripac hit Jake Starkey with a 30-yard pass and three plays later connected with J.D. Crouse on a 40-yard TD pass and its as 14-7 with only 42 seconds left in the quarter.

But then the game took a turn for the worse for Ironton.

A fumble two plays into their next possession was recovered by Starkey at the Ironton 34. Skripac hit Crouse for 29 yards to the 5-yard line and then ran in for the score on the next play and it was 20-7

Things got worse on the next series when Ryan Bailey blocked an Ironton punt giving the Raiders the ball at the 8-yard line.

Skripac ran for the touchdown at the ensuing play and it was 26-7 with 8:56 left in the half.

Ironton got the ball to start the second half but was forced to punt. After South Range and Ironton exchange puts, the Raiders had the ball all of two plays as Skripac hit Lindstrom who caught and ran for the 65-yard TD play and it was 39-14.

Ironton answered the score in just four plays — all passes — with Carpenter hitting Amari Felder on a 7-yard scoring pass and it was 39-21 with 4:46 left in the third quarter.

South Range then went on an 80-yard, 16-play drive that culminated when Skripac hit Dean Depizzo who was wide-open in the end zone on an 18-yard scoring pass and the lead was 46-21 with 7:57 to play.

Each team turned the ball over on downs in their next possession and then Ironton went 58 yards in five plays with Perkins making an over-the-shoulder touchdown catch with 5:58 left and it was 46-27.

A couple of 15-yard penalties on the kickoff against Ironton gave the Raiders the ball at the 19-yard line.

Pendleton praised his team for their hard work and effort all season, especially the seniors and for their leadership as they were key in Ironton reaching the state finals for the third time in four seasons.

“I want to say how proud I am of these seniors and some of the things they have battled through and overcome year after year to get here again. It’s just so impressive. The mentality that these guys have shown and the approach that they take to not only football, but work itself in the weight room, on the field or in the classroom,” said Pendleton.

“I don’t think they realize the magnitude of what they’ve done. They will look back and should be proud of what they accomplished because I am very proud of them.”