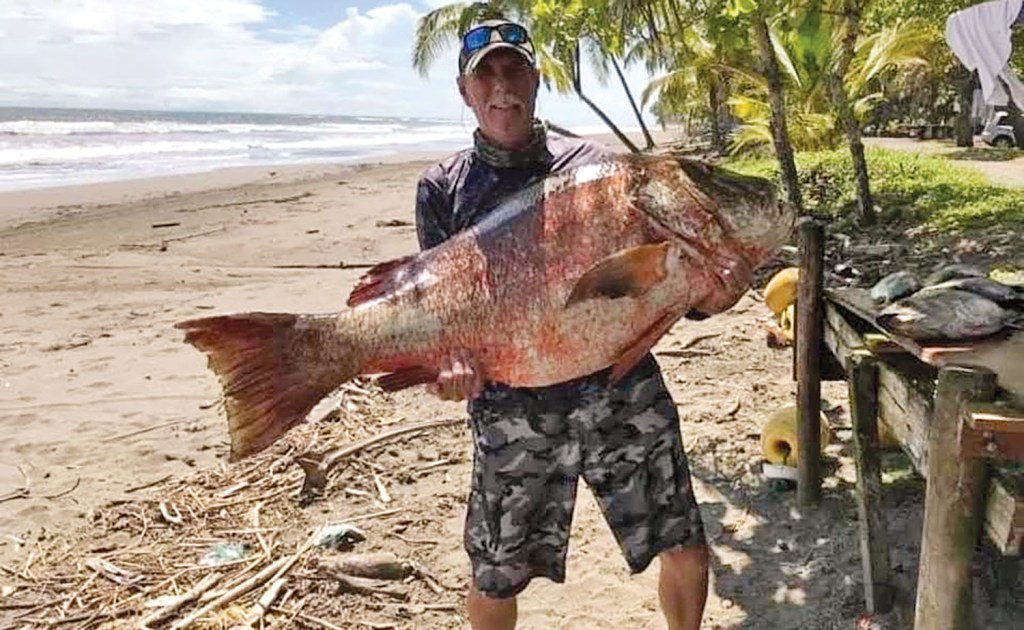 ESTERILLOS OESTE, Costa Rica — Steve and Tracy Blair, of Ironton, spend several months of the year in Esterillos Oeste Costa Rica. Their house is just a five-minute walk from the beach and get to see animals like monkeys and sloths in their backyard.

Steve Blair spends much of his time pursuing his passion for fishing. Over the past three years, he made his own custom fishing rods and repairs fishing rods for villagers who don’t have a way to get to the local marina.

On a recent fishing trip in October, Steve Blair headed out on a boat about 5:30 a.m. Around 10:30 a.m. he felt a tug on custom eight-foot rod with a 30-pound braided line and an 80-pound fluorocarbon leader.

He reeled in a whopper of a fish — a 110 pound cubera snapper.

“The current world record for Pacific cubera snapper is 78 pounds,” said Tracy Blair in an email to The Ironton Tribune. She added that unfortunately, because of the strict certification process, the fisherman would have to have registered members to verify the measurements and the small fishing village does not have that available.

But Tracy Blair said Steve was thrilled with the size of his catch.

“Steve is just happy knowing that he caught this once in a lifetime catch,” she said. “He said there was no way he could have transported it to a marina, no cooler large enough.”

Since he had no way of moving the monster snapper, he cleaned it on the beach and gave the meat to the people in the village.

Even after reeling in the snapper, Steve Blair continues to head out to sea to continue his catches.

“Today, he went out on a different boat and they caught 11 mahi-mahi and two Spanish mackerel,” Tracy Blair wrote.