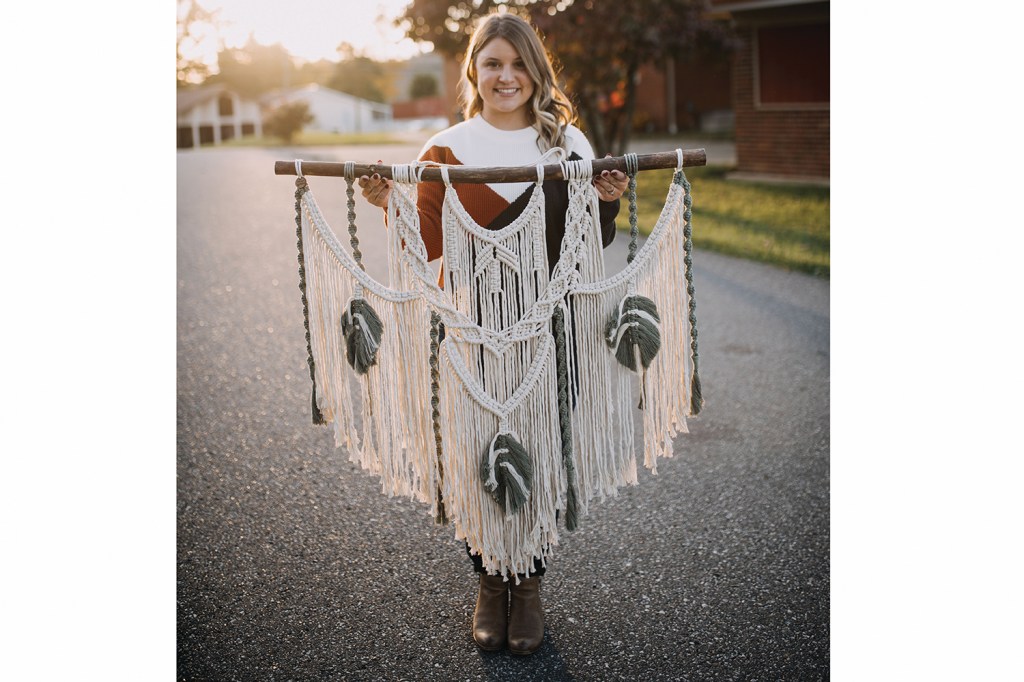 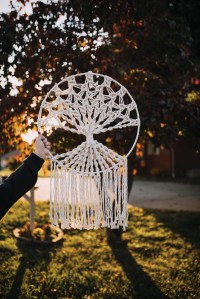 In the two years since she started doing macramé, Kelsie Sayre’s works have become a favorite at vendor fairs, local shops and through her online sales.

Sayre, a Waterloo native who lives in South Point, said she began because she was looking for something fun and calming to do in the evenings.

“I just felt like I wanted do    something with my hands, something creative,” she said, stating she had an interest after seeing other works. “And I just wanted to learn how to do it.”

Sayre is a stay-at-home mother to a four-year old and an eight-year-old son with cerebral palsy.

She said she quit her job, in order to take him to therapy and doctor’s appointments and the time at home gave her the option to pursue macramé.

She said it started for her in 2020, when after her birthday, she asked her mom for two spools of cord.

Sayre is self-taught at her craft, using patterns from Etsy and watching Youtube videos.

She points out that YouTube is a great resource, not just for what she does, but for things such as woodworking, with instructional video being plentiful on the website.

“It doesn’t matter what your skill level is,” she said. “You can learn anything.”

Her pieces range from tapestries to seasonal items such as Christmas trees and Halloween decor, while she also makes plant holders, keychains, coasters, mirrors and pillows.

“But my true passion is tapestries,” she said. “I feel like they really show my ability.”

These can range in size from 12 inches to seven feet, she said, including statement pieces for bedroom walls.

She said she did one for a wedding that was eight-by-eight feet, for which her husband put up hooks and she worked on it over a window.

She said her interest began because she had a love for fashion and décor from the ‘60s and ‘70s.

“My style of macramé is a modern spin on the classic ‘70s macramé, where synthetic materials were once used,” It’s really fun to be at vendor events and have women from that generation come up to me and tell me stories of when they or their mothers did macramé! It’s a nostalgic art.”

Sayre has sold her work at events such as the season vendor fairs on Vernon Street in Ironton, organized by Cardinal Wishes and treasures From the Valley, the Summer Solstice Music and Arts Festival in Ironton and at a vendor fair in downtown Russell Kentucky.

She also sells through local and regional stores, such as Three Bird Floral, in Milton, West Virginia, and Bluegrass Mama Creations, in Russell, Kentucky owned by Chelsea Potter, where Sayre has taught classes.

She also does custom orders for pickup.

Sayre said it depends on what the customer wants. At her parents’ farm in Waterloo, she collects fallen branches, which she takes back to South Point and cuts down to whatever size is needed, while cord is ordered online to fit the measurements and she gets to the project in her window workspace.

For custom orders, she said she always writes a note to customers, thanking them for her business.

Going forward, she said she has more projects in mind and hopes to “just create and sell.”

She said her goal is to do more large pieces, including Tree of Life wall hangings.

“They are for big life events,” she said. “Like when a family has lost someone or when there is a new baby.”

She said she also creates pieces to give to everyone when her family has a baby or wedding shower.

Sayre said she hopes to have more of an online presence in coming months and has started posting videos on TikTok. She said her aim to do more time-lapse videos, documenting the stages of her larger works.

“To let people know the process,” she said.

As for the success she has found, Sayre said much of it has to do with the uniqueness of the items.

“People take interest because every piece is handmade,” she said. “Every piece is different and it takes time. They’re special to give as gifts and more meaningful. Everything is a one-of-a-kind piece.”