Jennifer Chapman, Author at The Tribune 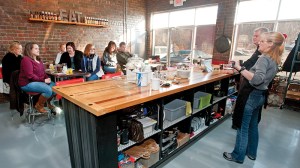 The Gospel of Good Taste

Cooking school in Wheelersburg, Ohio, showcases demonstrations Sam and Joyce Peters have found a way to make a living through having up to 20 strangers ... Read more

PROCTORVILLE — Women of all ages, from seniors in high school to senior citizens, spent Friday learning, networking and diving deeper into their community at ... Read more

When Lorene Rooper shared childhood stories with her daughter Robin Ramey, the younger woman knew she would someday share her mother’s story with the world. ... Read more

Throughout history, churches have changed, going from cathedrals to simpler buildings with padded pews and stained glass, to school buildings — and even movie theaters. ... Read more

Tragic death of  7-year-old girl leads mother to new calling When Barbie Bias is asked to describe her only daughter, Annaliese Grace, she smiles. ... Read more

For the third year in a row, the Ohio University Southern Council on Diversity and Cultural Enrichment is asking all sixth through 12th grade students ... Read more

With Thanksgiving just behind us, and Christmas straight ahead, the spirit of giving is on the hearts of many. The friends of 8-year-old Megan Foltz’s ... Read more

Work began Monday to rehabilitate the Bob Lutz Field at Tanks Memorial Stadium, following approval by the Ironton Board of Education. The football field at ... Read more

Ironton High School will be inducting its first Hall of Fame class this year, and would like the public’s help with one of the finishing ... Read more

Five years ago, Tom Brose had some lab work done at his doctor’s office, and it showed lowering levels of hemoglobin. Read more

According to the Boy Scouts of America, only five percent of Boy Scouts earn the coveted Eagle rank; Will Shiner is now in this ... Read more

Twenty years for the health of Ironton

Patti Rice was concerned about her father when, after her father’s quadruple bypass surgery, he turned down the position on the Ironton Board of ... Read more

The youth group of Sharon Baptist Church in Ironton plans to pack their luggage and head to Peru in June of 2013, and can use ... Read more

Winning isn’t everything for the South Point High School marching band, but they have had plenty of the top prizes. The band took home first ... Read more