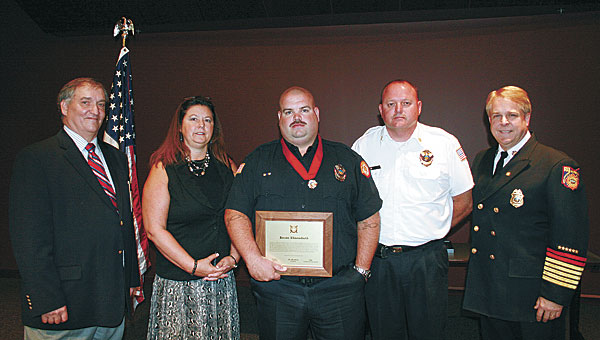 A former Coal Grove Police chief and fire fighter was honored by the Ohio Department of Commerce Division of State Fire Marshal for his bravery in saving two residents from a burning home last year.

Jason Bloomfield was a recipient of the 2010 State Fire Commission’s Ohio Hall of Fame Award.

The award was presented during the state’s 30th annual Ohio Fire Service Hall of Fame ceremonies. The State Fire Commission also took part in the ceremony at the Division of State Fire Marshal headquarters in Reynoldsburg.

“We welcome this opportunity to honor courageous firefighters and private citizens who represent the best of humanity,” said Director Kimberly Zurz, of the Ohio Department of Commerce. “These individuals have earned the highest award from Ohio’s fire service because of the selflessness and heroism they’ve exhibited. I commend them for making Ohio a safe and healthy place to call home.”

According to a press release from the fire marshal, “On March 17, 2009 Bloomfield acted selflessly and heroically to save the lives of residents of a burning home. Bloomfield was at the fire station with Fire Chief Gary Sherman when a report of a fire was dispatched. When the men arrived on the scene, they found heavy smoke and fire.

“While Sherman called for mutual aid, Bloomfield, without any protective clothing or breathing apparatus, entered the front door through heavy, black smoke. He was able to locate and carry the female occupant to safety.

“Bloomfield returned to the doorway, calling out to the other resident who was still inside the burning house. Hearing the man’s calls for help, Bloomfield re-entered the burning house with zero visibility, located the man and brought him out of the fire and heavy smoke. Bloomfield’s heroic actions and courageous response to citizens in need bring great credit to himself, his family, the Coal Grove Police and Fire Departments and the State of Ohio.”

Along with Bloomfield, Boardman Firefighter Tom Donadee was presented with the Ohio Fire Service Valor Award. The award is conferred to members of the fire service in the State of Ohio who, at great personal risk to themselves, are credited with directly saving or attempting to save a life during an extreme emergency situation above and beyond the normal line of duty.

A total of 85 citizens have been recognized for their heroism throughout the history of the citizen’s award.

“Today we have honored remarkable individuals who have risked their lives to helping others. Ohio’s communities are strengthened because of their actions,” said Interim Fire Marshal Don Cooper. “As part of the ceremony we honored three firefighters who gave their lives in the line of duty. Our deep appreciation goes to them and their families.”

The Division of State Fire Marshal also paid tribute to the service of Ohio’s fallen firefighters who have died in the line of duty since Sept. 11, 2009. Those honored were Lt. Joe McCafferty (Lancaster), John Moore (Columbus), Leo Powell (Morgan Township) and Lt. Edward Teare (Independence).

Calls to Bloomfield and Sherman were not returned.

Coal Grove game against Glouster Trimble has been canceled

The Coal Grove Hornets Friday night football game against Glouster Trimble has been canceled due to the tornado that knocked... read more