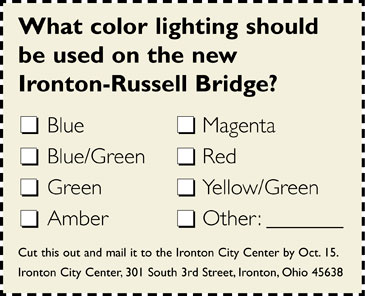 What color lighting will brighten up the Ironton-Russell Bridge? It’s up to the residents of Ironton.

A representative from the Ohio Department of Transportation has asked Mayor Rich Blankenship to pick out a color and he is hoping for some community feedback. They sent him an E-mail detailing seven possible lighting colors: blue, blue/green, green, amber, magenta, red, and yellow/green. The city is not limited to those colors, though.

“I’m sure Ironton will want orange,” he said. “I guess you can get any color you want, the ones that aren’t in the E-mail cost more.”

“Hopefully that bridge will be here another 100 years and they can say ‘Hey, I picked out the color’,” Blankenship said. “It’s in the end of the design phase and we want the community to get involved and choose what kind of color.”

Getting the bridge’s construction started soon has been Blankenship’s goal since he became mayor in the end of 2007.

“In my first 60 days of office I met with Gov. Strickland to get the project moved up,” Blankenship said. “It was supposed to begin in 2013 and I met with Strickland and told him of the importance and what it means to the city and how vital it is.”

The project was moved to its current construction time frame of July 2011.

“I’m going to do everything we can from our stand point to keep them on schedule,” he said.

The mayor is asking for feedback about bridge lighting by Oct. 15.