A taste of Autumn 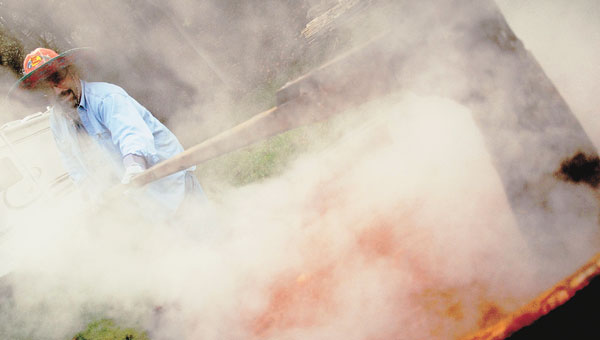 Surrounded by smoke, Jeff Combs takes the helm as he stirs the apple butter early Saturday before the start of the annual Sorghum and Bluegrass Festival.

SOUTH POINT — By 9:30 Saturday morning the fog that blanketed the Tri-State had lifted and in its place was the sweet tangy aroma of oak fires and the joyful laughter of good fellowship, at least around the Sand Road area of South Point.

That’s because it was time for the annual Sorghum Festival, put on each year by the friends and family of Bill Enyart and Ivan Smith.

Out on an open field, visitors could feel they had gone back in time as they watched Lowell Moon from South Point continue the old time tradition of sorghum molasses making.

“There is no secret to this,” Moon said. “It’s an art. You have to learn how to cook it down, have to know when it’s done.” 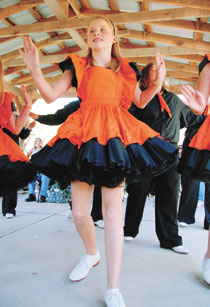 Members of the Lincoln County Cloggers perform during the annual Sorghum Bluegrass Festival in South Point.

Over a stove with its firebox filled with oak and other hard woods, Moon stirred the sugar cane juice that flowed into the five-foot metal cooking pan. On a knoll up above where Moon was cooking were friends who took turns grinding up bushels of long green stalks of cane, sweet to the munch by anyone who wanted to test it out raw.

The stalks were ground dry and the juice flowed down through rubber tubing to the cooking pans.

There Moon watched over the steaming liquid knowing just when it was ready to go into the quart jars.

And slow is what good molasses is supposed to be.

“My dad made sorghum and he passed away in ‘03,” Moon said. “This is to keep the tradition going.”

Nearby, local Masons and Order of Eastern Star members were stirring up another staple of fall — apple butter — in a 75-gallon kettle. Fifty pounds of sugar were added to 17 bushels of apples with a few ounces of cinnamon oil and cooked over an open fire for about eight hours.

And for those wanting something for lunch, there was Dan Fulks of Chesapeake cooking pinto beans with smoked ham hocks to be served up with corn bread.

The idea for the festival came about because Enyart used to watch his father-in-law make the sweet treat.

“We just thought we can continue this for awhile,” he said. “It’s not a money maker. We do it because we want to do it.”

Perfect cruise about more than destination

October is “wave month” so let’s start talking about cruise vacations. Cruise companies will have specials offers and promotions during... read more