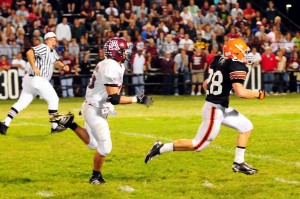 Ironton Fighting Tigers senior Tres Wilks (28) runs off and leaves the Ashland defenders on the way to one of his four long touchdowns run. Wilks also returned an interception 54 yards for a touchdown as Ironton routed Ashland 43-6 in a battle of unbeaten teams.

When Tres Wilks ran 64 yards on the first play of the game for an Ironton touchdown, Ashland fans got a little uncomfortable in their seats.

But they had no idea what uncomfortable would really be like Friday night.

Ironton’s defense made life more than uncomfortable for Ashland quarterback Sam Hunter and the offense pounded away with its ground game to rout the unbeaten Tomcats 43-6 before a standing room only crowd at Tanks Memorial Stadium.

Ashland was averaging 46 points a game through a 4-0 start with Hunter shredding opposing secondaries. Ironton coach Bob Lutz didn’t let that happen to the Fighting Tigers.

“We took Hunter out of his comfort zone,” said Lutz. “It’s hard to throw when you’re on the run.

“We had (Michael) Lawless and Wilks on the corners, we covered the seams and then played sick ’em. You can credit a lot of that to (assistant coach Bart Burcham). I called the defensive set and he called the stunts.”

Ironton’s 6-foot-4, 275-pound senior defensive lineman Brad Spoljaric spent almost as much time in the Ashland backfield as Hunter, harassing and chasing the quarterback into the waiting arms of his teammates.

Junior defensive end Skylar Fields registered four sacks of the scrambling Hunter and Spoljaric had one of his own.

“Spoljaric showed up tonight. We’ve been on him the first three weeks about the way he’s played,” said Ironton coach Bob Lutz.

“Fields had heck of a game. This was Brandon Leach’s first game (as a starter). We had a lot of guys play well.”

Hunter was 15-of-29 passing for 168 yards and he suffered two interceptions, one by Wilks in the third quarter that he returned 54 yards for a touchdown. He finished with 14 rushing attempts for 10 yards.

“Sam was running for his life the whole night,” said Ashland coach Leon Hart. “Ironton came out and played physical.

“I’m sure they were fired up for the game from a year ago. We come in with gaudy stats and undefeated, but just didn’t play well. You have to give a lot of credit to them.”

Ashland stunned Ironton 26-12 last year to snap a 17-game losing streak to Ironton in the river rivalry that was celebrating its 75th game. Ironton leads the series 43-29-3 and Lutz is now 29-4 against the Tomcats.

Wilks celebrated the anniversary with 212 yards rushing on just eight carries and four touchdowns plus the interception return.

“These guys up front did all the work. I just ran through the holes,” said Wilks. “We said we wanted to make sure we ran north and south all the time because of their speed. When you hit up the middle behind (Spoljaric) and (Robbie Webb) and the others guys, it’s off to the races.”

After Wilks stunned Ashland on the first play and Brian Warner ran for the conversion, Ironton forced a punt that rolled dead at the 3-yard line.

Quaterback Tommy Waginger picked up 15 keys yards behind a block by Pierce Reeves as Ironton moved the ball out to the 19. Four plays later Wilks went on a 71-yard scoring jaunt and Jonathan Williams’ conversion kick pushed the lead to 15-0 at the 4:58 mark.

Ironton (4-0) got the ball back with 6:22 left in the half and a late hit on Wilks nearly 7 yards out of bounds put the ball at the Ashland 45. Waginger hit Lawless with a 23-yard passs on fourth down to the 15 and two plays later Warner scored from 4 yards out.

Waginger ran for the conversion and it was 23-0 at the half.

Trevor White came up with an interception of Hunter on the fifth play of the second half and Ironton had the ball as the Ashland 40. Wilks scored three plays later from 25 yards out and it was 29-0.

Ashland managed to get to the Ironton 35, but Fields sacked Hunter for a 9-yard loss. On the next play, Wilks came up with his interception and Waginger’s conversion run made it 37-0.

“Skylar had a great game,” said Spoljaric.”(Hunter) can’t throw as well on the run. We played real well and our DBs (defensive backs) picked it up and covered them really well.”

The Tomcats finally got on the scoreboard when John Stafford ran 1-yard on the first play of the fourth quarter, but Fields tackled Hunter on the conversion play and it remained 37-6.

Six plays after the ensuing kickoff, Wilks started left and then cut back through a huge seam in the Ashland defense and raced 39 yards for the final score.

Ironton finished with 357 total yards including 334 on the ground. Warner had 63 yards on 16 carries.

Vikings run their way by Greyhounds