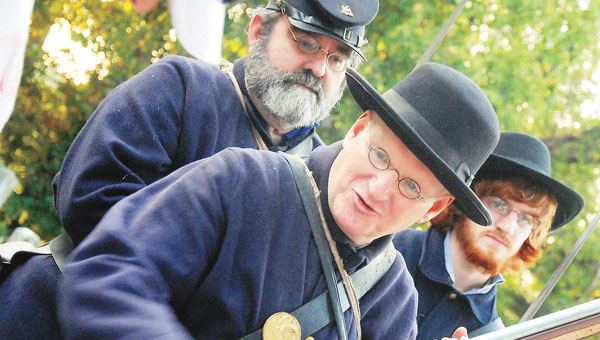 Jim Epling gives a confederate soldiers lesson at the Civil War Soldiers Plot as he demonstrates his bayonet during the 2009 Woodland Historical Cemetery Walk.

Woodland Cemetery is full of history and for a few hours this weekend, that history will come to life.

During the event, actors will portray some of the most famous historical figures from Lawrence County’s history that are buried in the cemetery.

There are between 25 and 30 actors portraying historical figures this year, a handful of them draw bigger crowds than others during the self-guided tours, the event’s coordinator Debbie Rogers said.

There’s Nanny Kelley, the only know female iron master in the world and formerly the second wealthiest woman in the world.

Then there’s Lorena, the namesake for a famous Civil War song who was born in Ironton and Richard Lambert, the first Lawrence County casualty from the Civil War. A group of war re-enactors portraying the Ohio Volunteer Infantry at the cemetery’s Civil War soldier’s plot always draws a crowd, too, Rogers said.

“They always demo the rifles and talk about the weaponry,” Rogers said. “The crowd always loves that.”

The gravesite of Antoniette Peters, a Russian ballerina who married James Peters, an iron furnace owner, will also be on the tour.

Historical society president Bob Cleary has been portraying Lowry during the historical walk for several years. This year because of recent vandalism, the Lowry mausoleum will not be a part of the tour.

“I think this year with the vandalism to the monument, I think it would be a little disrespectful to do Dr. Lowry,” Cleary said.

Instead of acting, Cleary will be taking care of the transportation. Event goers may park in Liebert’s parking lot and walk or catch a shuttle to the cemetery to start the tour.

The cemetery walk was started a few years ago by historical society member Naomi Deer.

“It’s one of the most educational tours that we have,” Deer said. “It teaches about all the people, that cemetery has at least 30,000 people in it.”

While admission to the walk is free, the historical society will be selling maps of the gravesites for $2. Participants are encouraged to bring flashlights, Rogers said.