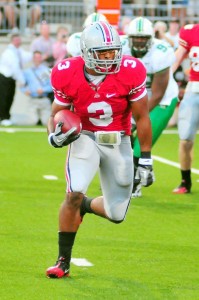 Ohio State Buckeyes running back Brandon Saine surveys the field as he picks up yardage in a game earlier this season against Marshall. The Buckeyes face Eastern Michigan, another big underdog.

COLUMBUS — It’s easy for teams to get excited about playing a ranked opponent, a league foe or a big rival.

Yet for the second week in a row No. 2 Ohio State must focus on a heavy underdog that is just hoping to avoid getting squashed.

Still, the team walking into that situation at Ohio Stadium on Saturday is well aware the Buckeyes will have their minds on the task at hand.

“I’ve been there where you have some games sandwiched around some, quote unquote, bigger games,” said Eastern Michigan head coach Ron English, winless in his 15 games at the school after assistant-coaching stints at Michigan, Louisville and Arizona State. “With the staff they have, coach (Jim) Tressel and his coaches have been doing this a long time. They’ve got a really good football team. They’re going to be ready to play.”

The Buckeyes appeared to be fully attentive to overmatched Ohio University on Saturday, a game which kicked off a string of four straight matchups against teams with a decided disadvantage in talent. Eastern Michigan is a 42 1/2-point underdog.

“We have to remember it’s still football. We only have a certain number of games to play so we have to keep focused each game and not look ahead,” running back Brandon Saine said after the easy 43-7 victory over the in-state Bobcats last week. “We play our game out there and stay with our game plan so we dont slip up.”

“We have so much experience we couldn’t let down because we’re only guaranteed 12 games,” he said.

Like Ohio University, Eastern Michigan is a Mid-American Conference team that will get an $850,000 check in hopes of hanging around for a while with the Buckeyes. Next up for Ohio State are Big Ten matchups at Illinois and at home against Indiana before the next big game on the calendar, a Top 25 showdown at Wisconsin on Oct. 16.

It’s not as if the Buckeyes don’t have a lot of areas in which to improve, despite three relatively comfy margins of victory.

Their kick coverage was shaky once again against Ohio. A week after having a kickoff and a punt returned for touchdowns in a 36-24 decision over Miami, the Buckeyes did not look like a team which spends hours and hours in practice working on special teams.

A penalty nullified a 99-yard kickoff return by Ohio’s Julian Posey, so the stats won’t show it. But faulty tackling and mistakes in filling assigned lanes have been an ongoing problem for the Buckeyes.

They also had a punt blocked — after having a field goal blocked in the opener.

“Everything that didn’t go well detracts from (the win),” Tressel said. “We just flat out missed a guy on the punt that was blocked, and you can’t do that, not if you want to win.”

It may take more than a missed tackle or two for the Buckeyes to lose to Eastern Michigan, which has been outscored 111-62 in three losses and has surrendered 11 rushing touchdowns while giving up 253 yards on the ground per game.

But the Buckeyes are not feeling sorry for the Eagles.

Or at least they’re not talking as if they are.

“Any team can beat us any day,” defensive back Tyler Moeller said. “We need to play our game every week and not let go of the throttle.”