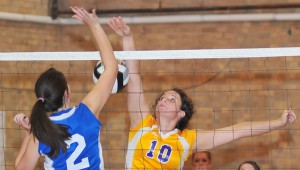 St. Joseph Female Flyers’ Katie Hacker (10) gets a kill against Rose Hill (Ky.) Christian in a volleyball match on Monday. The Female Flyers won the match and host New Boston on Wednesday.

The St. Joseph Female Flyers play with a lot of heart. Sarah Neal made sure that heart was pumping.

Neal scored 8 straight points in the fourth game of the Female Flyers’ volleyball match Monday that sparked them to a five-set win over the Rose Hill (Ky.) Lady Royals.

Sydney Hammond scored 15 points to lead St. Joseph. Chelsea Blackburn had 10 points and Katie Hacker had another strong game on the front line.

“Whether Sydney is having a good game or an off night, she never lets it get her down. She always plays a huge leadership role with the team. She keeps the team fired up until the last point,” said Thompson.

“Katie Hacker had a well-rounded game. She was strong at the net on offense and was a vital part of our defense. She seemed to be all over the court.

St. Joseph assistant coach Kristi Caudill said one key to the win was the fan support from the large crowd.

“I want to thank our fans for their support,” said Caudill. “It was a packed house and the fans really cheered our girls on at all times and kept their heads up.”

St. Joseph got its first win of the season on Saturday over the Boyd County (Ky.) Lady Lions in the Ironton Invitational Tournament.

“It was great to finally get our first win,” said Thompson. “The girls have been working hard the entire season to get this win. They have definitely earned it and certainly deserve it.”

The Associated Press MILWAUKEE — Edinson Volquez decided he needed a translator in the clubhouse, grinning through a series of... read more