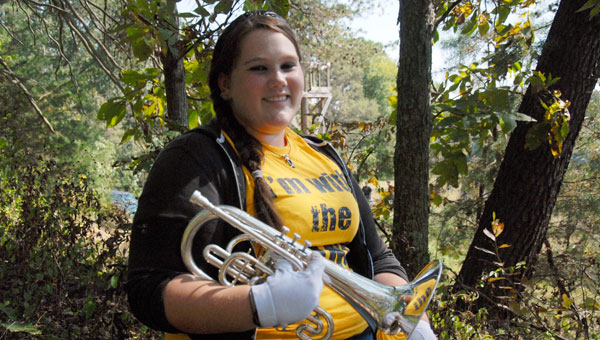 For Jessi Cox, her love and dedication for music has earned her high honors.

She recently found out that she was chosen to play in the 2011 Ohio All-State Orchestra.

Jessi, first-chair French horn player, submitted an audition tape last spring and was notified by letter that she was chosen.

Basham said that to audition, a student must submit a solo audition tape with piano accompaniment. The solo piece must be upper high school to collegiate difficulty. The students must also choose whether they will audition for the All-State Band or Orchestra.

Basham said that the orchestra includes stringed instruments while the band does not.

“I was really, really happy,” said Jessi about reading her acceptance letter. “I’ve auditioned before, one time, and didn’t make it. This was the first time I’ve auditioned and made it.”

Jessi said she chose to audition for the orchestra to gain experience.

“I’ve played in several bands, and I’ve never played with an orchestra with the strings and stuff,” said Jessi. “Since I’m going to be going into music, I wanted that experience.

Jessi’s mother and father, Melaney and Rick Cox, said they are proud of their daughter.

“It is the greatest honor a kid can get,” said Mrs. Cox. “She’s worked very hard for this.”

Not only is Jessi involved in Rock Hill’s conert and marching band, but she also plays in the Ohio University Activity Band. She has also played in the All-County and All-District bands and the Honors Band at Marshall University.

“In All-County I’ve been first chair every year and this will be my sixth year,” said Jessi.

All of these honors have not come without hard work.

“I try to practice at least 2 hours a day,” Jessi said. She said she also takes private lessons.

Jessi also said that her directors have been encouraging her all along the way.

Jessi said she will be going to the Cincinnati Conservatory of Music next fall and hopes to receive scholarships by auditioning.

Her All-State Orchestra performance will be on Jan. 30 in Cincinnati.

Event benefits homeless veterans Giving back to those who gave of themselves. That’s the idea behind the Community Day event... read more