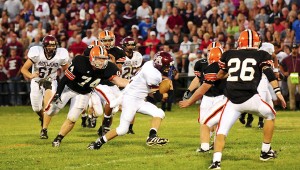 It’ll be from the frying pan and into the fire.

After beating the unbeaten Ashland Tomcats last week, things don’t get any easier for the Ironton Fighting Tigers.

In fact, Ironton’s remaining schedule doesn’t seem to let up starting this week as the Fighting Tigers host the unbeaten and Div. III No. 11 ranked Gallipolis Blue Devils.

“The Ashland game is over. We better be ready for Gallipolis because I promise you they’ll be ready for us,” said Ironton coach Bob Lutz. “Their coach (Mike Eddy) has had a year to get his system in and they’re playing pretty well. They’ve got a lot of good athletes.”

Two of the key athletes in the Blue Devils’ offense are 6-foot-1, 190-pound senior quarterback Ethan Moore and senior running back Austin Wilson (6-0, 180). Both are returning starters.

The Blue Devils had a 28-7 lead before Marietta rallied late to close the gap.

“Gallipolis has beat some good teams and the scores aren’t indicative of how well they played. The games weren’t as close as the final scores,” said Lutz.

“(Young) run hard and Wilson is very athletic. They’re a couple of good runners,” said Lutz. “The quarterback is pretty athletic. He can run or throw and he’s a tough kid.

“Their line isn’t real big, but they come off the ball and get after you. They’re going to use their team speed to get out on the corners and throw the ball.”

Size isn’t a problem on defense, especially at the tackle spots where the Blue Devils have 6-3, 320 Aaron Guisinger — a returning starter — and 5-11, 385 Codie Lloyd.

“They aren’t that big up front on offense, but they make up for it on defense. They’ll be hard to move inside and that’s where we like to run,” said Lutz.

The secondary has Wilson and Jarrell at the corners with Taylor at safety.

Gallipolis is considered the favorite to win the Southeastern Ohio Athletic League.