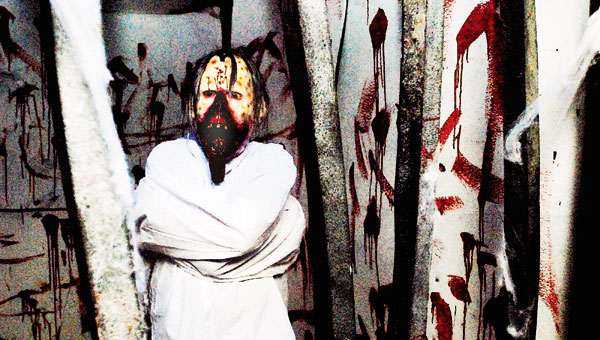 An actor portrays an inmate in an insane asylum during the Haunted Tunnel event. • THE TRIBUNE/JESSICA ST JAMES

If you think you’re brave enough, the new spirits that have taken up residence at the old Route 75 tunnel are dying to make your acquaintance.

Lou Pyles, president of the Ironton Lions Club, said that the group has already started preparing the Haunted Tunnel for its 19th year, making changes and inviting new ghosts and goblins to participate.

Pyles said that as she began preparations for this year’s frightening experience, she started hearing growling sounds coming from within the darkness.

“His spirit has surfaced in the tunnel,” she said of the 6-foot-8-inch, 300-pound werewolf. “The victims that come through will be able to hear his growls and snarls.”

Pyles said the tunnel setup takes two to three months and that they are making changes to ensure the haunted walk is more horrible for its victims.

The Haunted Tunnel is located across from the Ironton Hills shopping center at the U.S. 52 and Ohio 93 intersection. It is scheduled to open on Oct. 8 and run every Friday and Saturday in October. It will run from 7 p.m. to 11 p.m. and the price is $5 per victim.

Pyles said that the walk-through usually takes 15-20 minutes, that is, if you make it out.

And what becomes of those who don’t make it out?

“Their spirits get stuck there,” said Pyles. “We will see them there the next year.”

The Lions Club uses all of the proceeds from the Haunted Tunnel to make improvements in the community. They will also have a collection bin for used eyeglasses. They can be donated at the concession wagon.

“We hope everyone comes out and has a good time,” said Pyles.

She also warned of the new werewolf, “He’s pretty hungry. The victims should beware.”

COAL GROVE — The Coal Grove Village Council had its first reading of a proposal to add a $5 user... read more