Reds use HRs to tune up for postseason playoffs 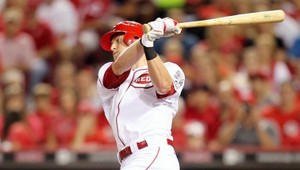 Cincinnati Reds’ outfielder Drew Stubbs hit his 22nd home run and drove in four runs in a 9-1 rout of the Houston Astros Thursday.

CINCINNATI — Brandon Phillips considers Brett Myers to be a playoff-type pitcher, and when he gave the Cincinnati Reds a chance to hone their postseason skills on Thursday night, they didn’t blow it.

Phillips hit one of Cincinnati’s three home runs and drove in three runs, helping the Central Division-champion Reds stay alive in the race for home field advantage in the first round of the playoffs with a 9-1 victory over the Houston Astros and their ace pitcher.

“For us to see Myers like that is nice,” said Phillips, who smashed a 441-foot homer into the upper deck in left field, his sixth career shot to reach that level. “Everybody is getting into the postseason mode. We hit his mistakes. We’re going to be facing a lot of good arms in the postseason, and that’s what you have to do — hit the mistakes.”

Drew Stubbs homered and drove in four runs, Jonny Gomes homered and Bronson Arroyo pitched seven solid innings in his playoff tuneup to keep Cincinnati two games behind San Francisco in the race to finish with the league’s second-best record behind Philadelphia. The Reds and Giants both have three games to play.

Phillips’ two-run homer and Gomes’ solo shot in the sixth inning — the 18th for both players — knocked Myers (14-8) out of the game before completing the sixth inning for the first time this season.

Myers, who went 5 2-3 innings on Thursday, lasted six or more innings in each of his previous 32 starts, becoming only the fifth major league pitcher since 1920 to last that long in his first 32 starts and the first since Arizona’s Curt Schilling went six or more in his first 35 starts of 2002.

“It stunk. but it’s the way the game goes sometimes,” Myers said. “You can only go so long before some things come to an end. I would have liked to win tonight. I didn’t feel tired out there. I am feeling it now, though. I’m physically and mentally beat down.”

Myers, who was 6-0 over his previous nine starts and 9-1 over his previous 16 since June, was roughed up for 10 hits and a season-high eight runs with four walks and seven strikeouts. His command problems were obvious to manager Brad Mills.

“He battled through it,” Mills said. “He kept working, working and working to get it back. There have been games this year that he didn’t have it early and found it as the game went on, but he couldn’t tonight. When a guy is struggling like he did, there comes a time. He’s our star pitcher. He deserved a chance to get out of those innings.”

Arroyo (17-10), whose previous season career high in wins was 15, retired the last 13 batters after giving up former Red Jeff Keppinger’s sixth homer with two outs in the third inning. He allowed four hits and no walks with four strikeouts.

“It was a good team win,” Arroyo said. “I didn’t feel especially good, but with them not playing for anything, when we got up 5-1, I felt pretty confident about being able to close it out.”

Arroyo will almost certainly pitch Cincinnati’s first postseason game since 1995 when the playoffs open next Wednesday and Thursday. Cincinnati’s first-round rotation might not be worked out until Sunday, manager Dusty Baker said before Thursday’s game.

“That was an outstanding performance,” Baker said about Arroyo after the game. “He threw 90-some pitches (91), so he went deep into the game. It’s been a great year for Bronson — 17 wins, and with any luck, even more, but I’m sure he’ll take 17 and 20 next year.”

Jay Bruce led off the second with a single, the first of his three hits, and Stubbs followed with his 22nd homer. He made it 4-1 by driving in two runs with a bases-loaded single in the fifth.

“Myers is one of the best in the league,” Baker said. “That was a very productive night.”

Notes: The Astros went 14-13 in September, the fourth consecutive month they were .500 or better, their longest streak since the 2001 Astros were .500 or better in every month from April through August. … Houston OF Michael Bourn probably won’t play the rest of the season, Mills said. Bourn has missed the last 10 games with a strained right oblique. “Michael is better, but he’s coming back very slowly,” Mills said. “He’s one guy we want to be 100 percent before we put him out there. It is looking like the chances are slimmer every day.” … The Reds will finish the season with winning records against every Central Division team except St. Louis.

HUNTINGTON, W.Va. — Life on the road can be fun, but only if you win. So far, things haven’t been... read more