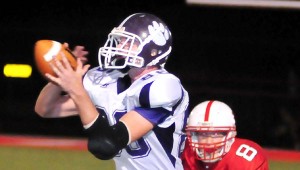 PEDRO — When the coaches break down this game film, they’ll have to do it in four different sections.

In a game that changed complexion in each quarter, the Chesapeake Panthers scored in the final two seconds and kicked the extra point to edge the Rock Hill Redmen 28-27 Friday in the Ohio Valley Conference opener for both teams.

“The first quarter was us, the second quarter was them, no one scored in third, and the fourth quarter was both teams making big plays.”

The first quarter belonged to the Panthers who took a 14-0 lead. Rock Hill came back from a 21-0 deficit in the second quarter to tie the game. After a scoreless third quarter, Rock Hill went up 27-21 only to have the Panthers put together the winning drive with time running out.

“We dug a deep hole and got ourselves down early. We climbed out of it. We had a nice offensive rhythm. We were able to have some balance running and throwing the ball,” said Rock Hill coach Todd Knipp.

“We laid it on the line. We just came up a little short.”

Rock Hill (0-6) fumbled the ball on the first play of the game and the Panthers recovered. Austin McMaster ran 1-yard for the touchdown and Jacob Wells kicked the first of his four conversions.

Chesapeake (1-5) made a hit on the next play and caused another fumble. The Panthers recovered to set up a 12-yard scoring pass from Brandon Noble to McMaster.

“(The turnovers) were a big momentum swing for them,” said Knipp. “We moved the ball, but they were able to drive the ball at the end.”

Rock Hill put together its own scoring drive but Jon Pinson came up with an interception in the end zone for Chesapeake.

The Panthers used the momentum swing to drive to the Rock Hill 1-yard line. McMaster scored on the first play of the second quarter and it was 21-0.

The Redmen began their comeback as Cody Massie caught a 32-yard scoring pass from Will McCollister. The conversion kick failed.

Rock Hill went on another scoring drive on its next possession with Steve Lewis running 12 yards for the score. McCollister hit Trey Wilds with the conversion pass to cut the deficit to 21-14.

McCollister threw a 15-yard scoring pass to Massie and he also kicked the conversion to tie the game a 21 just before halftime.

The Redmen moved the ball in the third quarter but bogged down with penalties. They finally scored with 6:36 left on a 1-yard run by Shane Harper. The conversion kick hit the upright.

Chesapeake used all but two seconds of the remaining time to drive the ball for the tying touchdown as McMaster scored on another 1-yard run. Wells’ conversion kick just cleared the crossbar to give the Panthers the win.

Ball control was the key for the Panthers as they rushed 60 times for 236 yards. McMaster had 83 yards, Patrick Hintz 72, and Trey West 67 as the trio combined for 55 carries.

McCollister was 10-of-16 passing for 179 yards and two scores and an interception. Lewis ran for 65 yards and Harper had 62 as the Redmen gained 330 total yards to 289 for the Panthers.