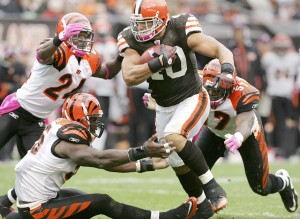 CLEVELAND — Another fourth-quarter lead was in danger of disappearing when Cleveland’s offense met before taking the field.

Three losses in three weeks had stung the Browns.

It was time to change, so running back Peyton Hillis and his teammates gathered and laid out their plan.

This time they did.

Hillis, a human battering ram in helmet and shoulder pads, rumbled for 102 yards and a touchdown, Phil Dawson kicked three field goals and the Browns survived a big day by Cincinnati’s Terrell Owens for their first win, 23-20 over the Bengals on Sunday.

The Browns (1-3) had dropped their first three games by a total of 12 points and in cookie-cutter fashion, failing to finish down the stretch and frustrating coach Eric Mangini with silly, self-inflicted mistakes.

Learning from their errors, they overcame a costly penalty against rookie safety T.J. Ward, made a crucial sack of Carson Palmer in the closing minutes and withstood a 10-catch, 222-yard performance by an unstoppable Owens, who moved into second place on the NFL career list in receiving yards.

“We didn’t falter,” said Hillis, who has surprisingly become Cleveland’s best offensive weapon. “The defense came up big and we grinded out the final four minutes. It proves we are improving, and it was good to show our fans we could pull out a win and they could say, ’Hey, we actually got a team.”’

The Bengals (2-2) thought they had one, too. But after having their eight-game winning streak in the AFC North snapped, the defending division champions have some new questions and concerns.

After taking a 23-10 lead in the third quarter on Dawson’s 22-yarder, which moved him within one field goal of tying Hall of Famer Lou Groza’s franchise record of 234, the Browns nearly let another lead slip away.

Cleveland took over at its 11 with 4:41 remaining and was able to run out the clock by giving the ball to Hillis, acquired in an offseason trade with Denver for quarterback Brady Quinn. On second-and-7, Hillis bounced outside and picked up 24 yards to put the game on ice just before the two-minute warning.

Quarterback Seneca Wallace, who made his third straight start in place of the injured Jake Delhomme, then took a knee three times to expire the clock — a victory formation the Browns hadn’t used since last season and one they haven’t even practiced.

“We’ve been playing closer and closer to the way I believe we can and had not gotten the result,” said Mangini, who presented a game ball afterward to his oldest son, Jake, who attended his first NFL game. “It’s important to know it’s something we know we can do on a consistent basis.”

One of Palmer’s TDs was a career-best 78-yarder to Owens, who ran wild in Cleveland’s secondary as the Browns double-teamed Chad Ochocinco.

Cincinnati’s offense finally lived up to preseason hype, but failed to come up with the necessary conversions down the stretch.

“We’re frustrated,” said Owens, wearing dark sunglasses at the postgame podium. “I don’t think personally, I’m frustrated. From the standpoint of us knowing we have offensive weapons and we’re not moving the ball like we’re capable of moving it — that’s where the frustration comes in.”

A personal foul against Ward for a vicious hit on rookie Jordan Shipley helped the Bengals pull within 23-20 on Palmer’s 4-yard shovel pass to Brian Leonard with 10:44 left.

On third-and-goal, Palmer’s pass intended for Shipley was incomplete, but Ward delivered a forearm to Shipley’s head in the end zone and was nailed with a penalty, giving the Bengals an automatic first down. Shipley laid dazed with a concussion and was helped off the field.

The Bengals felt Ward was excessive.

“A ridiculous play,” Owens said. “The guy’s defenseless. I just hate to see a guy get hit like that in the head. For him to take a cheap shot like that, that’s uncalled for. At one point, I thought he was out cold. His eyes were rolling in the back of his head. You never want to see a teammate in that situation.”

Ward didn’t see anything wrong with his hit, which will likely draw a hefty fine from the league.

“I hit him with my shoulder,” Ward said. “They (Bengals) tried to yap at me, but I ignored them. I would do it again.”

The Browns went three-and-out the next time they got the ball, and Palmer passed the Bengals down field after huddling with Owens and Ochocinco on the sideline several times in the second half. Cincinnati got to Cleveland’s 37, but Ochocinco was called for interference on third down and Roth pulled down a scrambling Palmer from behind on the game’s biggest defensive play.

“It’s a huge sigh of relief,” Roth said. “We finally got the monkey off our back. We’ve got to keep this thing rolling.”

Notes: The Bengals lost both S Roy Williams and CB Jonathan Joseph to injuries. Williams hurt his right knee in the second half. Joseph injured his right forearm trying to tackle Hillis in the second and did not return. Owens passed Isaac Bruce (15,208) into second place on the league’s career yardage list. Owens has 15,325 yards, second only to Jerry Rice’s 22,895. Owens also jumped Bruce (1,024) for fifth in receptions with 1,030. … Hillis has scored a rushing TD in four straight games, the first Browns back to do that since Greg Pruitt had five in a row in 1975. … Browns WR/KR Joshua Cribbs had 107 return yards, putting him 12th on the career list with 8,443.

Cincinnati Reds’ outfielder Jay Bruce watches the flight of the ball as he hits his 25th home run of the... read more