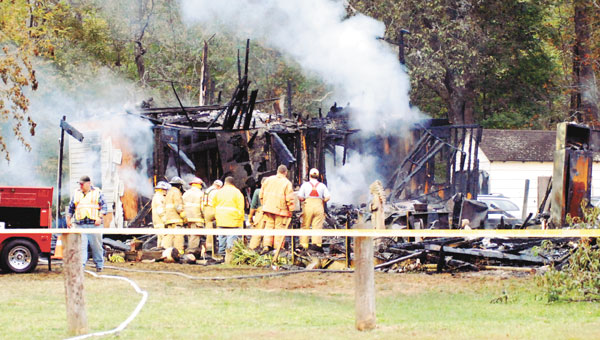 Area firefighters gather around the remnants of a 12-bedroom home Monday morning. Seven were sent to the hospital and five have been confirmed dead. THE TRIBUNE/JESSICA ST. JAMES

Four women and one male infant were killed in a fire on State Route 373 early Monday morning. The fire was reported around 2:12 a.m. near the 700 mile marker of the road, in Elizabeth Township. Seven other people were taken to the hospital for smoke and fire injuries. Twelve people were believed to be in the house at the time of the fire.

“There is no more searching going on,” Jay Sherman, a lieutenant with the Coal Grove Volunteer Fire Department, told reporters Monday morning. “We believe that we have found everyone.”

The house was formerly used as a group home about 10 years ago, Sherman said. Whether the victims and survivors were a part of one family was not immediately clear, he said.

At the time firefighters arrived on the scene of the fire, the structure was already engulfed.

“(It was) already through the roof and the cars were on fire in the front yard,” Sherman said. “It was going pretty good.”

The victims, who were asleep at the time of the fire, appeared to have been alerted to the fire and had attempted to escape, Sherman said. They were all found in the center of the home, about 10 feet from the door.

One man jumped from a second floor window to escape the fire, Sherman said. The man then reported the fire to 911 from a neighbor’s home. He was transported to a hospital for his injuries.

Survivors told officials from the Division of State Fire Marshal that smoke alarms alerted them to the fire. Investigators were not able to confirm that because of the extent of the damage to the structure, said Shane Cartmill, public information officer for the state fire marshal’s office.

The fire started at the breezeway, which is in the center of the home, Cartmill said. The exact cause has not been determined.

Two dogs alerted one of the survivors to the fire, a 13-year-old neighbor said, though Sherman could not confirm that.

Two dogs escaped the fire, while other pets, including cats and an alligator, are missing Sherman said.

Because there were no fire hydrants nearby, firefighters shuttled in an estimated 30,000 gallons of water to battle the flames. Approximately 40 firefighters from Coal Grove, Elizabeth Township, Upper Township, Decatur Township, and Hamilton Township responded to the fire.

According to the state fire marshal’s office, the fire was the deadliest in Ohio this year. On Jan. 2, four people died in a Richland County fire. Including the five lost in this fire, 106 people have died in fires in Ohio this year.

HANGING ROCK — It’s taking something old to turn it into something new. That’s what’s happening at the Wayne National... read more