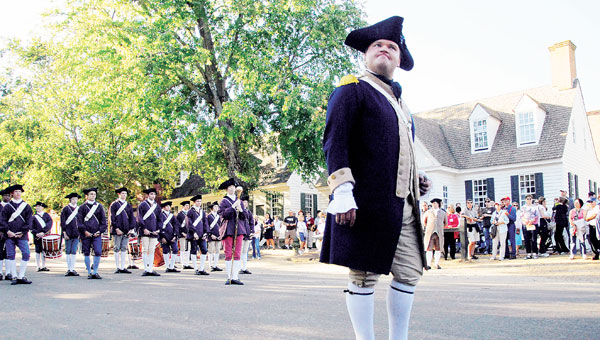 A patriot stirs up the crowd as he and other patriots attempt to round up recruits to fight against the British for freedom. THE TRIBUNE/JESSICA ST. JAMES

On Oct. 2, 2010, travelers from Ohio University Southern revolted against the British government in Williamsburg, Va.

The group, while on an Education on Location trip with OU in Historical Virginia, participated in a true, 18th century living-history experience.

Williamsburg was the first capital of Virginia, and still was the capital that day when the travelers joined its citizens in an historical uprising.

The revolt that would result in the collapse of the Royal British Government in America began in front of Charlton’s Coffeehouse at the end of Duke of Gloucester Street, a stone’s throw away from the Capitol and House of Burgesses.

Concerned citizens, including the OU travelers, stepped back into 1765 and waited in front of that coffeehouse where the governor, Lord Dunmore, met with his Council and George Mercer, Virginia’s appointed stamp distributor. The citizens demanded to know if Mercer would resign from his position or continue doing the bidding of the British Government.

The crowd also met in front of the Raleigh Tavern in 1775 to witness the trial of Joshua Hardcastle, who was accused of speaking against the cause of America. Three jurymen were selected from the crowd to hear testimony and witness statements.

One of the jurymen was Mark Cooper, an OU traveler.

“That just made the experience come to life,” said Cooper. “It’s kind of surreal in a way. When you’re directly involved like that you get more out of it, you know?”

Cooper, a middle childhood education major, was on the Historical Virginia for class credit.

Cooper and the rest of the jury found Hardcastle guilty and he was sentenced to be tarred and feathered, unless he would give a public apology, print it in the Gazette and never be guilty of a like offense. Hardcastle agreed to those terms.

OU history professor Bob Leith said that reenactment like the ones at Williamsburg help to reinforce what is learned in the classroom.

“You read that chapter in the textbook but all you do is fearfully try to remember the important things you could be tested on, you don’t have any memories of intrinsic things,” he said.

Then in 1776, a militia was formed to fight against the tyranny of the British Government.

For any willing, able-bodied man between the age of 16 and 60, a promise of $10 was offered as well as 50 acres of land in the Ohio Valley upon completion of service.

“If the love of your liberty ain’t enough to fight for, maybe that is,” said a patriot calling others to arms.

Another patriot called out, “Men of Virginia, step forward and show what a real solider looks like! Freedom has a flavor that the protected will never know.”

Ten volunteers from the crowd, including Mark Cooper, stepped up to take arms for the cause. The newly formed militia was given the Oath of Enlistment and marched to the capitol behind the fife and drum corps.

“The guy was swearing us in, we were marching, he was yelling at us to stay in line and keep your elbows close and then you’re marching toward that Capitol. I don’t think a lot of those men really grasped at the time what they were really getting into,” said Cooper.

“I’ll never be able to understand the sacrifices and the bravery and the dedication it took for those men to take that stand. It gave me just for a brief moment there a little sample of what they were going through. Everybody that loves history should be able to experience something like that.”

In front of the capitol, Patrick Henry addressed the crowd and new militia.

“Three millions of Americans armed in the holy cause of liberty are invincible by any force which our enemy can send against us,” he said as the crowd cheered and gave a resounding “Huzzah!”

Edmund Randolph was also there to support the fight for liberty and to remove England from the capitol.

“Strike the flag of tyranny and in exchange, let us replace it with the colors of a free and independent American States!”

The British flag was lowered from the top of the capitol and a new American flag was raised to take its place as Patrick Henry led the crowd in giving three cheers to the United States, George Washington and Americans in arms.

Before the victory at Yorktown that ended Colonial America in 1781, there was Williamsburg. The OU travelers were able to experience the political climate of that time in Williamsburg, where Thomas Jefferson, Patrick Henry and George Washington walked and talked.

They heard the bell toll from Bruton Parish Church, the same bell that rang in the ear of Jefferson and Henry and the patriots that fought for American liberty.

Bob Leith added, “When you pick it up and read the history, you can read the words, the date and who did it, but you see it out there, it just put an indelible print on your mind.”

Without doubt, the OU travelers will remember indelibly when they stood up against tyranny and supported American liberty.

Pet lovers come out for blessing

The Rev. Sallie Schisler give a blessing to Max, a member of the Lawrence County Sheriff’s Office canine unit as... read more