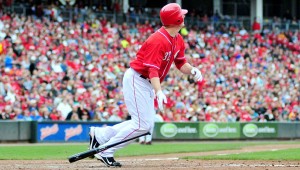 Cincinnati Reds’ outfielder Jay Bruce watches the flight of the ball as he hits his 25th home run of the season. Bruce’s home run snapped a 2-2 tie and gave the Reds a 3-2 win over the Milwaukee Brewers Sunday. (The Ironton Tribune/ Kent Sanborn of Southern Ohio Sports Photos)

CINCINNATI — Aaron Harang’s voice wavered. He paused and dabbed a tear from his left eye, then reached across his face and cleared the right one as well.

Tough ending for the Reds pitcher. Tough day for Milwaukee manager Ken Macha, too — team management told him he won’t be back next season.

Jay Bruce hit his fourth homer of Cincinnati’s title-clinching week and the Reds eased into the playoffs for the first time in 15 years, beating the Brewers 3-2 on Sunday with another mix-and-match lineup.

The only disappointment on the Cincinnati side: Harang had to leave in the third inning because of a blister on his right index finger. With a too-pricey contract option for next season, his 7 1/2-year stint with the Reds is likely finished.

“There was definitely some emotion,” said Harang, wearing a gray NL Central champions T-shirt in the clubhouse. “It was definitely hard coming off the field and ending it the way it did. Cincinnati has been good.

“It’s been seven-plus years now. In this sport anymore, seven years in one place doesn’t happen much.”

Harang isn’t in Cincinnati’s postseason rotation. Edinson Volquez, Bronson Arroyo and Johnny Cueto will pitch against the Phillies, who have the NL’s best record. The first game is Wednesday in Philadelphia.

There’s no more beating up on also-rans for the NL Central champs. They made it to the playoffs by going 61-30 against teams with losing records, but were only 30-41 against those .500 or better.

The Brewers were one of those teams. They finished 77-85, then told him he was done. Macha guided Milwaukee for two years, and the club held a contract option for 2011.

A few years ago, the Reds also were struggling. Now, they face the powerful Phillies.

“We’re not going to go, ’Uh-oh, it’s this team or that team,”’ Reds closer Francisco Cordero said. “It’s not easy what we’re going to do. We’re going to the playoffs, and every team is in the playoffs because they’re a good team.”

Bruce’s ninth-inning homer on Tuesday secured the division title. He hit three more in the last two games, helping the Reds finish with 91 wins. His solo shot off Randy Wolf (13-12) snapped a 2-all tie in the fourth.

Corey Hart had three hits for Milwaukee. He unsuccessfully tried to steal home in the seventh off Aroldis Chapman, who was pitching from the windup. Cordero worked the ninth for his 40th save — the third time he’s reached the mark — in 48 chances.

The final regular-season game was played in an October playoff chill — 51 degrees and windy at the first pitch, prompting the 37,582 fans to bundle in coats and scarves. Reds manager Dusty Baker replaced seven position players after the fifth inning.

Before the game, Baker announced his all-righty rotation for the first round of the playoffs. Arroyo is the only one with playoff experience. When he was with Boston from 2003-05, he made two playoff starts and pitched in relief.

The regular-season wrapup was a farewell moment for Harang. The 32-year-old right-hander has an option for next season at $12.75 million that’s too steep for Cincinnati. He’ll become a free agent after the Reds exercise a $2 million buyout.

Harang pitched the season opener for the fifth straight year, spent time on the disabled list with back spasms and was demoted to the bullpen after his return. He started Sunday in place of Volquez, who threw in the bullpen instead.

Matt Maloney (2-2) got the win with three innings in relief.

Wolf agreed to a three-year, $29.75 million deal with the Brewers in the offseason after going 11-7 with the Dodgers. He went seven innings on Sunday, allowing three runs and nine hits while throwing 122 pitches.

NOTES: Hart finished strong, hitting safely in 17 of his last 18 games. … Eleven of Bruce’s 25 homers have come off left-handers, including three of his last four. … Chapman’s fastball topped out at 98 mph. … The Reds’ season attendance was 2,060,551. Last year they sold 1,747,919 tickets, their fewest since 1986. … The Great American Ball Park fire alarm went off in the bottom of the third inning. The warning horn blared during two at-bats.

The Associated Press CINCINNATI — The Reds will go with three right-handers in their playoff rotation regardless of the opponent.... read more